WHO releases guidelines on mask use against COVID-19 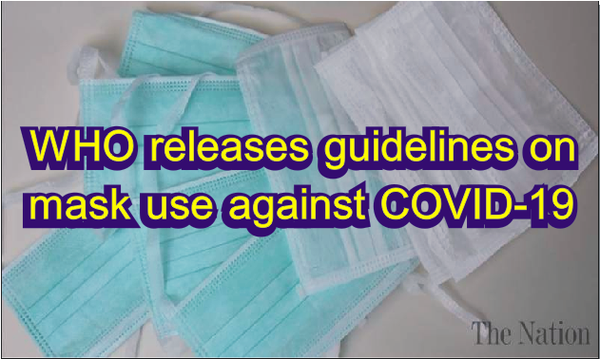 The World Health Organization (WHO) on Friday released guidelines on the use of masks as controversy swirls in some countries due to political leaders' remarks over their use. WHO director-general Tedros Adhanom Ghebreyesus said at a thrice-weekly video press conference that he wanted to talk about who should wear masks, what materials they should be made of and when they should be worn.

"I wish to be very clear that the guidance we are publishing today is an update of what we have been saying for months: That masks should only ever be used as part of a comprehensive strategy in the fight against COVID-19," said Tedros.

"In the light of evolving evidence, WHO advises that governments should encourage the general public to wear masks where there is widespread transmission and physical distancing is difficult, such as on public transport, in shops or other confined or crowded environments," he said. Based on new academic research, Tedros said the WHO advised people to wear masks consisting of at least three layers of different materials, as outlined in the guidelines, if wearing fabric variants.

He cautioned, however, that "masks on their own will not protect humanity from COVID-19 and the WHO continues to recommend that people who are sick with symptoms of the virus should remain at home and should consult their health care provider." The WHO was asked about any guidance for political leaders in the US, where it was noted some key leaders at the White House did have masks on at a press conference Friday. President Donald Trump has also publicly expressed his distaste for wearing masks in front of journalists.

"This guidance is given as guidance to our member states and it must be interpreted and adapted by national authorities accordingly," said WHO's executive director of health emergencies, Dr. Mike Ryan. "We have no specific advice for any specific grouping at the country level other than certain occupational hazards or other areas like health care, where we believe there's a significant excess risk and then in that situation, we advise very specifically, the type of mass to be used."