US second highest in world in coronavirus deaths 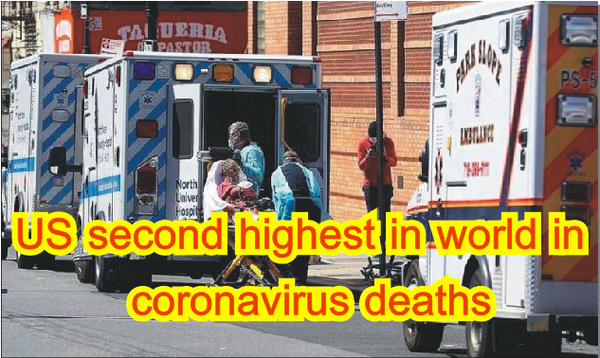 The US surpassed Spain early Thursday to record the second-highest death toll in the world from the novel coronavirus, according to Johns Hopkins University. The university's running tally counted 14,817 deaths and 432,132 cases as the U.S. struggles to curb the outbreak. A total of 23,906 people have recovered from the disease. As of early Thursday, Spain had 14,792 deaths, according to the data. Italy has the most reported deaths in the world with 17,669.

The bulk of the US virus-related deaths came two days after President Donald Trump warned this week would be "very painful" for the country for coronavirus-related casualties. "During this painful week, we see glimmers of very, very strong hope. This will be a very painful week…at least part of next week, probably," Trump said.

US Surgeon General Jerome Adams also warned it would be very hard week for the country. "This is going to be the hardest and the saddest week of most Americans' lives. This is going to be our Pearl Harbor moment and our 9/11 moment, only it's not going to be localized, it's going to be happening all over the country," he told Fox News Sunday. New York is the state worst-hit by the pandemic with more than 6,200 deaths.

The US has become the country with the most confirmed coronavirus infections in the world, followed by Spain, Italy and Germany. Since the virus emerged last December in the Chinese city of Wuhan, it has spread to at least 184 countries and regions. There are more than 1.48 million confirmed infections worldwide and more than 88,500 deaths, according to Johns Hopkins. Nearly 330,000 have recovered.