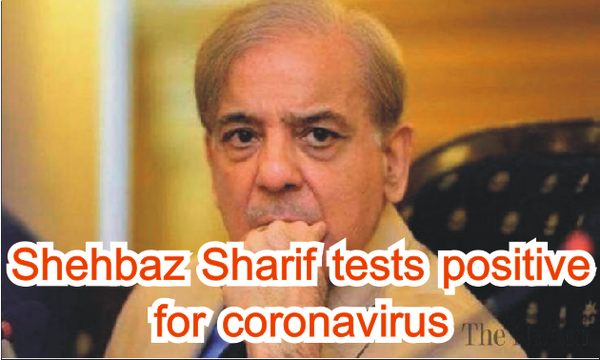 PML-N President and Leader of the Opposition in the National Assembly Shehbaz Sharif has tested positive for coronavirus, party spokesperson Marriyum Aurangzeb confirmed on Thursday. Shehbaz, 69, a cancer survivor, is isolating at home, Aurangzeb said, adding that the PML-N leader was following his doctors' advice on how to fight the infection.

PML-N representative Ata Tarar revealed that Shehbaz had himself tested for COVID-19 after showing mild symptoms of the infection. He said that the result of the test came back positive on June 10, at 4pm. "He was summoned on June 9 by NAB. We kept saying he is a cancer survivor, and even if you do want to conduct the investigation then do so via video link. However, this is blind political vendetta," he said.

In response to a question about the former Punjab chief minister traveling with hundreds of PML-N workers and not paying heed to social distancing protocols, Tarar said that he had appealed to the party's supporters to remain indoors and not gather at public places.  "It wasn't an official call from the party [for them to come out]," he said. "We wanted to avoid this situation. I want to say on record that if God forbid, anything were to happen to him, NAB and Imran Niazi will be held responsible."

Shehbaz had appeared on June 9 at NAB Lahore after he was summoned by the anti-graft body to answer questions related to the assets beyond means and money laundering case.  The opposition leader's appearance at the NAB Lahore office lasted for a little over an hour. A large number of PML-N supporters had gathered outside the office to chant slogans in support of the party leader.

"I request my friends and well-wishers to pray for my quick recovery," Iqbal had written on Twitter.

"May God keep everyone safe from this pandemic," he added.

Earlier, Aurangzeb has tested positive for the coronavirus along with her mother.

So far, many prominent politicians have been contracted coronavirus.