Government dismisses US concerns regarding CPEC 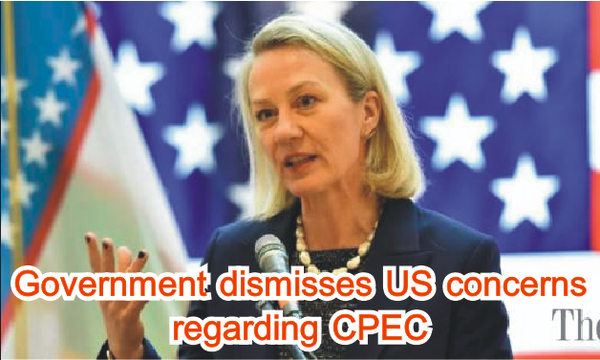 Foreign Minister Shah Mehmood Qureshi said on Sunday that the China-Pakistan Economic Corridor (CPEC) is a project that was necessary for Pakistan's development, and is likely to further expand. While speaking to media in Multan, FM Qureshi called CPEC a "game-changer", and told media that there were no restrictions on other countries like the United States to invest in the economic zones being established under the project. The government's spokesperson, Firdous Ashiq Awan, also voiced her views through a series of tweets around the project. She said the corridor was to open "new vistas" of economic development and prosperity, not just for Pakistan and China, but the entire region at large.

"Do not concur with US concerns on the project," Awan said, "CPEC is a guarantor of our economic development." The comments from the government came after the US government's top diplomat for South Asia, Assistant Secretary of State Alice Wells, had spoken to the press about American concerns regarding the corridor. In reference to the media reports surrounding CPEC, Wells said: “It’s clear or needs to be clear that CPEC is not about aid. This is almost always the form of loans or other forms of financing, often non-concessional with sovereign guarantees or guaranteed profits for Chinese state-own enterprises that are repatriated to China." She contrasted this kind of economic "support", which was in fact debt financing, with American grant-based aid. Wells also claimed American investment brought with it American "values, processes and expertise" that added up to more than just economic aid.

On the economy, she said: “Now, together with non-CPEC Chinese debts payments, China is going to take a growing toll on the Pakistan economy, especially when the bulk of payment starts to come due in the next four to six years.” This Friday, Chinese Ambassador to Pakistan Yao Jing rejected the diplomat's comments, saying that Beijing would never pressurize Islamabad to pay off its debts. He said that China would not act like the International Monetary Fund (IMF). "If Pakistan is in need, China would never ask it to repay its loans in time," said Jing.