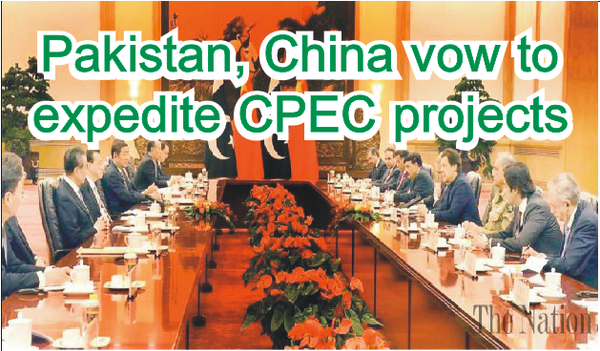 BEIJING    -   Pakistan and China on Tuesday vowed to expedite completion of projects associated with the multi-billion-dollar China Pakistan Economic Corridor (CPEC) and also to implement the second phase of the China–Pakistan Free Trade Agreement (FTA). Acknowledging measures taken by Pakistan, to advance the CPEC projects, China maintained that the second phase of the CPEC will pave the way for enhanced Chinese investments in Pakistan and thus will prove instrumental in consolidating Pakistan’s economic development. The understanding was reached at a meeting between visiting Pakistani Prime Minister Imran Khan and his Chinese counterpart Li Keqiang at the Great Hall of the People in Beijing, a statement issued by Pakistan’s Foreign Ministry said. Both the leaders maintained that frequent and substantive bilateral exchanges were contributing to elevating the all-weather strategic co-operative partnership to new heights and were reinforcing people-to-people ties. The two leaders also witnessed signing of various agreements and memorandums of understanding (MOUs) aimed at deepening Pakistan-China ties in a range of socio-economic sectors.

Prime Minister Imran Khan reiterated his invitation to Premier Li to visit Pakistan at the earliest opportunity. On his arrival, Imran Khan accompanied by Foreign Minister Shah Mehmood Qureshi, and other cabinet members, said the all-weather strategic cooperative partnership between the two allies has served the fundamental interests of the two countries and contributed to peace, development and stability in the region. ‘’Both leaders maintained that frequent and substantive bilateral exchanges were contributing to elevating the all-weather strategic cooperative partnership to new heights and were reinforcing people-to-people ties,’’ the statement said. Terming the multi-billion-dollar China Pakistan Economic Corridor project “pivotal” to accelerating Islamabad’s economic development and regional prosperity, Khan assured that the expeditious completion of the CPEC projects, was the foremost priority of his government.

Premier Li was apprised of the actions undertaken recently to fast track CPEC projects and to push the development momentum in strategic Gwadar district – a key project of the CPEC. Both leaders agreed that the implementation of the second phase of China-Pakistan FTA would lead to more trade, economic and investment opportunities between the two countries. The two sides also discussed regional security situation including human rights and humanitarian situation in Indian-occupied Kashmir following New Delhi’s scrapping of the disputed valley’s longstanding special rights in August. Khan, according to the statement, apprised Premier Li of the latest developments and the importance of urgent action by the international community to alleviate the sufferings of the Kashmiri people in the lockdown.

The bilateral talks were followed by a banquet hosted by Premier Li. Earlier, addressing the China Council for Promotion of International Trade (CCPIT) in Beijing, Imran Khan, who was inspired by China’s way of tackling corruption, said he wished to put 500 corrupt people in Pakistan behind bars just like Chinese President Xi Jinping did, to rid the county of ‘biggest impediment to prosperity’. “President Xi waged one of the biggest crusades against corruption and I want to do the same, but unfortunately our system is too cumbersome to handle it,” the prime minister said.

Imran mentioned the effective accountability system in China, where a corrupt mayor was convicted in just five days on charges of stashing tons of gold in house’s basement. The prime minister said his top priority was to end red-tapism - another form of corruption - and promote meritocracy in the country. He said China’s exemplary step of taking its 700 million people out of poverty in 30 years was a source of learning for Pakistan. Also, Pakistan can acquire expertise from Chinese model of business, investment and wealth creation with an aim to be spent on less privileged segment of society, he said.

Imran said since assumption of office, his earliest decisions among others was to facilitate foreign investors to encourage profitability. “This government is the first one after 1960 which is encouraging ease-of-doing business - the concept being driven by the Prime Minister’s Office itself,” he added. Of progress on CPEC, he told the audience comprising Chinese businessmen and investors that a CPEC Authority was formed to resolve all the related issues. Under Phase I, he said, Gwadar Free Zone had been completed, Gwadar Smart City master plan approved and matters of tariff and pending projects were resolved. In Phase II, the cooperation would focus on agriculture as Pakistan being the world’s best fertile land would like to learn from Chinese expertise in yield productivity, he added.

He said prominent reasons to invest in Pakistan included strategic location, 220 million population with 60 percent aging under 30, economic revival reforms and industrial clusters through Special Economic Zones. “This is the right time to invest in Pakistan, as the country offers an improved business facilitation system and mindset as well,” he said. He said for Chinese investment, the areas of attraction included textiles, manufacturing, Information Technology, physical and technological logistics, food processing, agriculture, and tourism and hospitality. Also, the oil and gas sector and the gold and copper reserves offered tremendous opportunity, he added. On scope in tourism sector, he mentioned Pakistan’s diverse terrain ranging from high peaks to sandy beaches and deserts as natural beauty. Whereas, the area of religious tourism is another attraction as the country was a cradle of ancient civilizations including Buddhism, Sikhism and Hinduism etc.

The prime minister also held a series of meetings with the representatives of Chinese companies in Beijing and invited them to invest in Pakistan. China Gezhouba Group Chairman Lyu Zexiang called on the prime minister in a meeting. The China Gezhouba Group Corporation (CGGC), founded in 1970, is one of the most competitive listed companies with very strong financing capabilities. As a transnational operation enterprise with the fastest growth in China, CGGC has expanded its business in more than 100 countries and regions. In another meeting, the prime minister met CEO of Long March Tyre Company Li Qingwen and discussed investment and business scenario. Chaoyang New Long March Tyre Co Ltd is a member of the Lianoning Tyre Group and is one of the best tyre manufacturers. Also, Chairman of Board Orient Holdings Group Limited Jiang Xueming called on the prime minister and discussed industrial matters. Orient has business areas involving infrastructure construction, real estate development, construction materials, chemical fibre, mining, e-commerce, new materials and intelligent manufacturing, etc. In another meeting, Chairman China Metallurgical Group Corporation (MCC) Guo Wenqing called on the prime minister. China Metallurgical Group Corporation (MCC Group) is the longest-running construction group in China’s iron and steel industry, serving as the pioneer in this field.