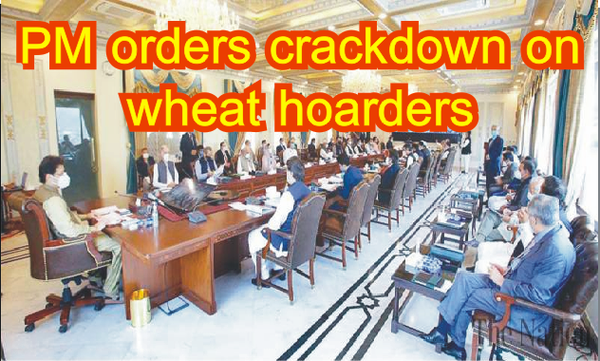 ISLAMABAD - Prime Minister Imran Khan on Tuesday directed to launch a country-wide crackdown against the elements involved in wheat hoarding asking the provincial chief secretaries to continue the policy of zero tolerance against adulteration. He issued these directives while chairing a high level meeting to review the adequate supply of wheat and flour to the people across the country and prices.

He directed that comprehensive administrative measures should be taken to further improve the inter-provincial coordination and ensure equitable prices of wheat and flour across the country. He also directed the Chief Secretary Sindh to finalize the wheat release policy in the province as soon as possible keeping in view the experience of the last year.

He directed that the plan for implementation of the decision to import wheat to meet the future needs of wheat and flour be finalized as soon as possible. The Chief Secretary Punjab apprised the meeting that a 20-kg bag of flour is being provided at 860 rupees across the province. He said the Punjab government is releasing 18,000 tons of wheat on daily basis to ensure ample availability of wheat, while about 20 percent of flour is being sent to Khyber Pakhtunkhwa, he said.

He also gave a detailed briefing on the availability and prices of sugar in the province. Chief Secretary Khyber Pakhtunkhwa briefed the meeting on the prevention of wheat smuggling. The meeting was attended by Federal Ministers Hammad Azhar and Syed Fakhr Imam, PM’s Advisers Dr Abdul Hafeez Sheikh and Abdul Razzaq Dawood, Special Assistant Dr Shahbaz Gil and other senior officers. The provincial chief secretaries attended the meeting through video-link.