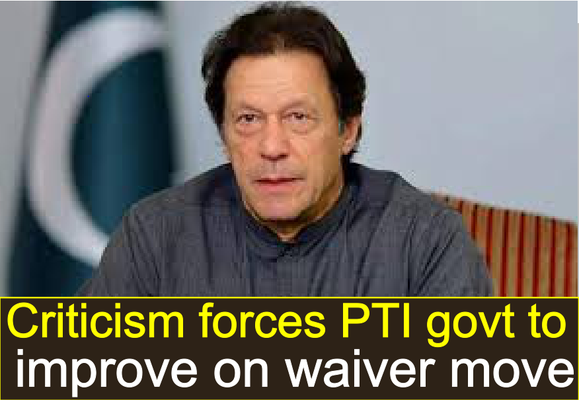 ISLAMABAD: Prime Minister Imran Khan on Tuesday directed authorities to amend the controversial Gas Infrastructure Development Cess (GIDC) Ordinance to ensure recoveries of dues that five fertiliser companies collected from poor farmers but did not deposit in the national kitty.

The latest move came after the government faced criticism for waiving Rs300 billion GIDC dues in favour of a few industrialists. The ordinance was issued on August 27 – five days after The Express Tribune reported about the government’s plan to favour a handful of industrialists.

The decision to amend the controversial ordinance has been taken amid the opposition’s plan to shoot it down in the Senate where the Pakistan Tehreek-e-Insaf (PTI) government lacks a majority.

The fresh details showed that Rs88.5 billion would be waived in favour of Sui Southern Gas Company Limited (SSGCL) and 53% of this or Rs47.7 billion would go in the pockets of just 10 Karachi-based firms.

“The prime minister has directed that the GIDC Amendment Ordinance 2019 should be amended to include clauses related to a forensic audit of fertiliser firms,” said Federal Minister for Power Omar Ayub Khan while briefing the media about the decisions of the federal cabinet that met on Tuesday.

“During the cabinet meeting, the PM told the law minister that in order to ensure transparency forensic audit of fertilizers firms should be made part of the GIDC Ordinance,” said Special Assistant to Prime Minister on Petroleum Nadeem Baber. He said there was a view that these fertiliser companies had recovered the GIDC from farmers but the government had no idea of this amount.

The fertiliser companies owed Rs138 billion to the government and according to the ordinance Rs69 billion would be waived in their favour. Through the presidential ordinance, the PTI government waived Rs208 billion worth of liabilities of a few industrialists out of Rs416.3 billion in addition to writing off late payment surcharge for the past seven years, bringing into dispute its claim of a clean government.

It also offered these firms to settle the remaining Rs208 billion against their sales tax refunds.

Baber said if all the firms availed the offer, the government would receive net Rs150 billion to Rs160 billion on account of the GIDC arrears. However, the opposition parties denounced the government’s decision to write off Rs208 billion in favour of a few rich people.

“The Pakistan Peoples Party (PPP) would move a resolution to repeal the GIDC Amendment Ordinance 2019, once it is tabled in the Senate,” said PPP leader Sherry Rehman while talking to The Express Tribune.

The Constitution allows the National Assembly and Senate to block a presidential ordinance through a majority vote. The opposition parties enjoy a majority in the Senate and could give a tough time to the government, subject to the condition that they sincerely joined hands.The PPP in 2015 had managed to strike down the PIA Corporation (Conversion) Ordinance 2015 through its majority vote in the Senate. Senator Rehman also moved a calling attention notice in the Senate on the GIDC issue.  “It was mala fide on part of the government not to table the GIDC Ordinance in the Senate before calling off the session on the last day,” she said.

She said the PTI government had made the Senate an ‘ordinance factory’ and tabled 15 ordinances during past one year.

She also moved resolutions against four ordinances that the government tabled on Tuesday, calling them a fraud.

“The Pakistan Muslim League-Nawaz (PML-N) also strongly opposes the government’s decision to write off Rs208 billion and would not support the ordinance when it is tabled before the parliament,” said Senator Mussadiq Malik of the PML-N. “It is strange that the government did not reach out of court settlement in Reko Diq case where Pakistan was fined $6 billion but rushed to favour its cronies in the GIDC case. The state is not willing to enforce its writ and has surrendered before rich people.”

Out of Rs208 billion principal waivers, an amount of Rs89 billion would be written off that the SSGCL was supposed to recover from its industrial and commercial consumers.

A major chunk of it or Rs17.1 billion would be waived against the K-Electric dues, followed by Rs12 billion of the Engro Group companies that received gas from the SSGCL system, according to the SSGCL list.

The SSGCL spokesperson promised to give version on the amounts that would be written off in favour of 10 largest beneficiaries but he did not respond to calls later on. The SNGPL managing director also did not tell whether his company would release the names of the beneficiaries.

The SSGCL list showed that the Fauji Fertilizer Bin Qasim plant would get Rs8 billion waiver only on account of gas that it received from the SSGCL.