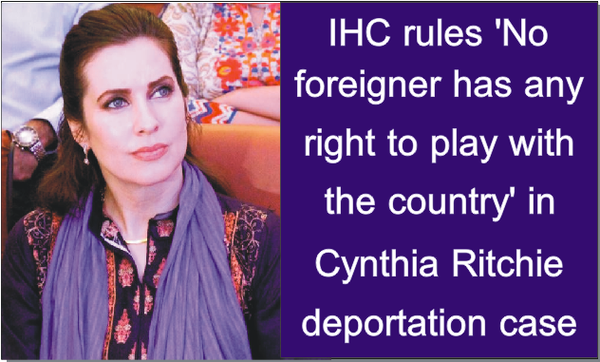 Islamabad High Court (IHC) has expressed annoyance over the interior secretary report in US journalists Cynthia D Ritchie deportation case and directed interior secretary to review the reports. The case seeking deportation of Cynthia D Ritchie from Pakistan came up for hearing before Chief Justice IHC Athar Minallah Friday. Latif Khosa appeared on behalf of the petitioner and Additional Attorney General (AAG) Tariq Khokhar represented the federation in the court.

The CJ IHC remarked during the hearing of the case US lady had leveled grave allegations. AAG told the court “ I have filed interior ministry reply on previous hearing. Cynthia D Ritchie is possessing Pakistan visa till August 31. Latif Khosa counsel for the petitioner told the court cases were running against Cynthia D Ritchie in FIA. How US national lady who is not Pakistani national worked with Pakistan institutions.

CJ remarked “ a foreigner has come here and she has leveled grave allegations. It has been said in the report she is working with KP and ISPR. Was federal government sleeping. Wrong impression has been given in the interior ministry report with reference to Cynthia D Ritchie. No foreigner has any right to play with the country. Under what law and agreement work was carried out along with her. This court does not accept any presumption. A person who works with ISPR has no right to give statement. .

AAG prayed the court to give more time.

CJ remarked no person had gone to police station.

AAG told the court FIA’s proceedings are underway against the allegations.

The hearing of the case was adjourned till August 04.