39 victims found dead in truck in UK were Chinese nationals 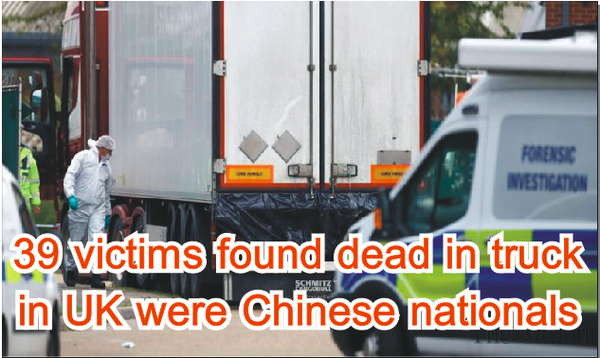 A truck container with 39 dead bodies, 38 of which are adults and one is a teenager, was found on Wednesday morning in UK southeastern Essex county. The 39 people found dead in in a lorry container in Essex on Wednesday were Chinese nationals,  according to the ITV News. Essex Police were unavailable for comment. The house in which the company of the Irish citizen was registered is a residential building, reports the bTV channel, whose employees arrived in Varna to verify the address. Movement Tomorrow - Today was registered in the name of Joanna Marie Maher last spring, bTV said. According to the residents of the house, no firm was ever located there.

The Ministry of Transport and Police of Varna haven't commented on this information. The investigation into the incident was launched right after the discovery of the truck in the Waterglade Industrial Park, the Huffington Post news outlet reported, citing a police chief superintendent. A 25-year man from Northern Ireland, the driver of the truck, was arrested on suspicion of murder.

According to the preliminary data, the truck came from Bulgaria and crossed the UK border on 19 October. British Prime Minister Boris Johnson slammed the incident as an "unimaginable tragedy" and called for the people smugglers behind it to be "hunted down and brought to justice".