2 dead, 3 injured after 'unprovoked firing' by Indian troops along LoC 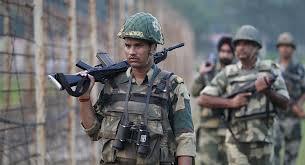 A woman and a teenage boy were killed after being hit by Indian shelling from across the Line of Control (LoC) on Sunday, residents and officials said.

The casualties occurred in Nakyal sector of Kotli district which has been constantly experiencing physical and material losses in ceasefire violations by Indian troops, they said.

The shelling started at about 3pm and was indiscriminate in the beginning, said Kotli Senior Superintendent of Police (SSP) Raja Muhammad Akmal.

Later, its intensity reduced and by 6:30pm it stopped, he added.

Residents said at least two houses in Daryari Palani village were hit by the shelling, as a result of which Salamat Bibi, 60, and Razia Bibi, 30, were injured in one house and Zeeshan Ayub, 13, in the other.

“My mother had just gone to the next door house of Muhammad Wasim when suddenly Indian troops resorted to shelling,” Salamat Bibi’s son Chaudhry Khurshid told Dawn by telephone from the Tehsil Headquarters Hospital in Nakyal.

“Suddenly, a shell landed on Wasim’s house injuring his wife Razia Bibi as well as my mother,” he added.

All three were brought to the ill-equipped THQ Hospital where the doctors pronounced Salamat Bibi ‘dead on arrival’.

Razia Bibi and Zeeshan were referred to the District Headquarters Hospital in Kotli after initial treatment but Zeeshan succumbed to his wounds after a short journey.

The distance between Nakyal and Kotli is around 37 kilometres but residents say it takes them more than one and a half hours to shift their injured from the THQ Hospital in Nakyal to the DHQ Hospital in Kotli due to the poor condition of the road.

“Zeeshan was brought dead to the (DHQ) hospital,” Zaheer Abbas, a medical technologist at the DHQ Hospital told reporter. He said that Razia Bibi had been admitted and was out of danger.

The funeral prayers of the deceased lady were offered in the ground of Boys Degree College in Nakyal.

On Saturday evening, Nazia Shakil, 32, and her son Nauman, 6, were injured after a shell landed in the courtyard of their house in Fatehpur village and damaged it badly, police official Muhammad Akmal said.

According to a statement issued by Inter-Services Public Relations (ISPR) in response to today's as well as yesterday's attacks, Indian troops engaged in "unprovoked firing" along the LoC in Nakyal and Rakhchikri sectors, targeting civilian population.

The military's media wing confirmed that 60-year-old Salamat Bibi and 13-year-old Zeeshan Ayub had been killed while three other citizens were injured, including two women.

"Fire being responded by Pakistani troops," said the ISPR in its statement.

Offering condolences to the bereaved families, he said their sacrifices would not go in vain.

"The way Indian Army is targeting the non-combatant Kashmiri population on both sides of the divide shames the cruelest mercenaries of modern history," Haider said.