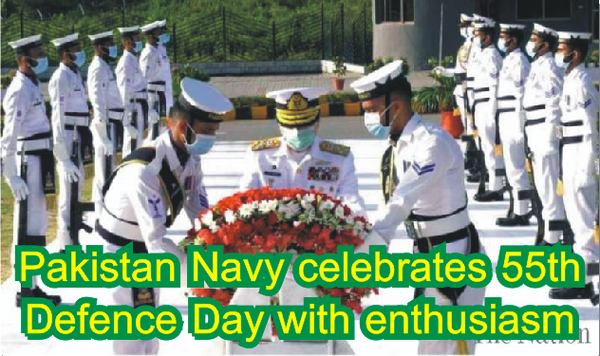 Pakistan Navy has celebrated 55th Defence Day of Pakistan with reverence and enthusiasm. The day was observed to commemorate supreme sacrifices of our Armed Forces, Shuhada, Ghazis and national heroes who stood against the enemy with unparalleled display of unity and tenacity during 1965 Indo-Pak War. In his message on the occasion, Chief of the Naval Staff, Admiral Zafar Mahmood Abbasi paid homage to the Shuhada and Ghazis who remained undeterred by the size of the enemy and foiled its nefarious designs with grit, courage and honour.

On this day, nation acknowledges sacrifices of its gallant and resilient soldiers, sailors and airmen who defended the ideological and geographical frontiers of their motherland. Chief of the Naval Staff, Admiral Zafar Mahmood Abbasi laid floral wreath at Shuhada’s Monument at Naval Headquarters Islamabad. Flag hoisting ceremonies were held at all naval units and establishments wherein Commanding Officers of all units and establishments addressed special gatherings of officers and men and highlighted significance of the day. All ships and establishments were decorated and illuminated in accordance with naval traditions.