Protest demos on Friday against persecution of Muslims in Delhi 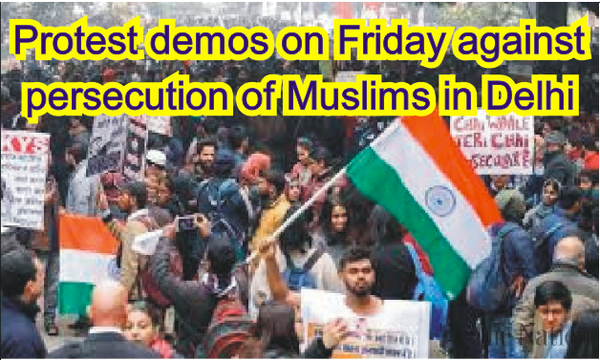 Protest demonstrations will be held across the country on Friday on the appeal of Jamaat-e-Islami Secretary General Ameerul Azim against the persecution of Muslim community in Delhi In a statement issued from Mansoora, he said minorities particularly the followers of Islam were being victimized across India on the direction of BJP-RSS led government. The goons of Hindutva, he added, were given free hand to burn and destroy the mosques, houses of Muslims. Mobs of Hindus were allowed to start deadliest violence against Muslims in Delhi on the occasion of US President Donald Trump just to crush their peaceful protest against controversial citizenship law passed recently by Indian parliament, he added.

Criticizing the silence of international community on Muslim genocide in world so-called biggest democracy, he said the world must take steps to protect the right of the minorities in India. Meanwhile, JI Deputy Emir Liaqat Baloch said that expecting positive outcome from Donald Trump mediation offer on Kashmir was like a living in fools’ paradise.

India had abrogated the special status of held Jammu and Kashmir a few days after Trump offer on Kashmir, he said, adding the US President had proposed the worst deal of the century between Israel and Palestine soon after declaring Prime Minister Imran Khan his friend. America, he added, could not be trusted when it came to the matter pertaining to the Muslim world. Baloch highlighted the need for devising a national Kashmir policy with the consultation of national leadership.