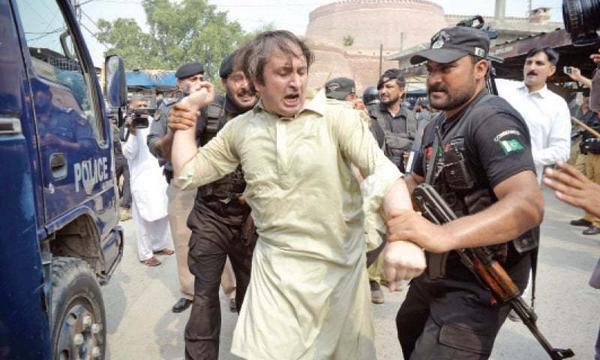 Following violent clashes a day earlier in Peshawar at the Lady Reading Hospital during which 13 doctors were arrested, a case was registered by police on Saturday nominating 26 doctors.

The arrested doctors were shifted today from Peshawar to Mardan Jail.

The case has been registered under Sections 148 (rioting, armed with deadly weapon), 149 (every member of unlawful assembly guilty of offence committed in prosecution of common object), 186 (obstructing public servant in discharge of public functions), 188 (disobedience to order duty promulgated by public servant), 337 (shajjah), 353 (assault or criminal force to deter public servant from discharge of his duty), 427 (mischief causing damage to the amount of fifty rupees), and 506 (punishment for criminal intimidation).

According to police, the protesting doctors "disrupted the peaceful hospital environment and engaged in stone-pelting of police officers".

Due to the stone pelting, a lady constable, as well as a reporter were injured, said police. In all, 15 medical staff and eight policemen were wounded.

The Grand Health Alliance, a grouping of doctors, paramedics, nurses and other health staff, had staged a protest on Friday against the Regional and District Health Authorities (RDHA) Act, 2019 which they describe as "nothing short of privatisation of government hospitals".

In an unprecedented move, the government had banned the gathering of five people and more on the LRH premises under Section 144 to avoid any disruption in patient facilitation for a period of 10 days.

GHA spokesperson Dr Hazrat Akbar had yesterday said that if the government did not meet their demands, including the release of arrested doctors, registration of cases against Dr Nosherwan Burki and health minister Dr Hisham Inamullah, reversal of the RDHA Law, end to the role of Dr Burki in KP’s health sector, and removal of the health minister within 24 hours, they would boycott duty, including emergency services, all over the province.

In a press conference held today, the doctors announced an extension in their ongoing boycott of OPDs and other services at government hospitals and private clinics, giving the government a deadline of October 1.

Dr Ameer Taj, an executive member of the GHA, said that if the five demands are not met by then, the doctors would completely boycott emergency services across the entire province. The doctors have also demanded a judicial probe into the clashes with police.

According to SSP (Operations) Zahoor Babar Afridi, "the law is equal for all and the matter is being investigated under the relevant laws."

"The identities of the remaining protesters are being ascertained via footage recovered," he added.

The federal and provincial government will provide funds to each authority, that will report to a policy board, chaired by the KP health minister. The regional authorities will have the power to:

ensure that objectives set by Regional Health Authority (RHA) are achieved and oversee effective management and issue strategic directions to health facilities in the assigned region.
approve budget of RHA and allocate funds to health facilities
oversee health service delivery
implement government policies and directions
ensure that its programmes are effective and efficient
ensure transparency
The law also dictates that the doctors that are already serving, will continue to be treated as civil servants and will be entitled to pension and other such benefits. The regional health authority will have the authority to transfer doctors as per need in health facilities in their respective districts of domicile.

The law further says that the existing cadre will be treated as the "dying cadre" and will continue until the retirement of the last civil servant, after which the posts will be abolished and regional authorities will have the power to create positions and recruit as per regulations.