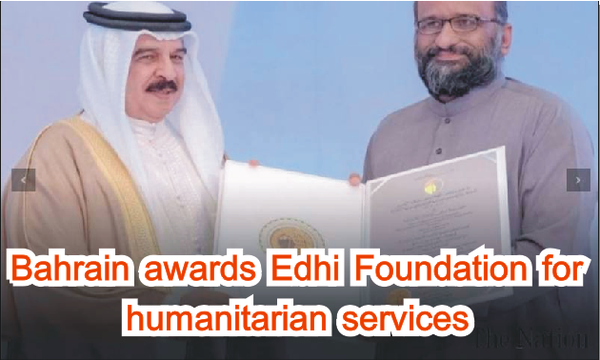 The Edhi Foundation, Pakistan’s largest charitable organization, has been conferred with prestigious Isa Award for its service to humanity during a ceremony in Bahrain’s capital Manama. According to a press release by the Isa Award for Service to Humanity, the Edhi Foundation was shortlisted along with several other qualifiers from other countries by an international jury. Edhi Foundation has been honoured with a cash amount of USD one million, a gold medal and a certificate of appreciation. The Pakistani charity foundation was selected after the general secretariat of the Award, in coordination with the jury, "conducted intensive field research covering the work sites of the Foundation, reviewing methods of providing services and verifying the records of achievements", the statement reads.

King of Bahrain, His Majesty Hamad bin Isa Al Khalifa presented the accolade to Mr Faisal Edhi, the head of the Edhi Foundation. This is the fourth award by the organisation – established in 2008 in memory of Emir Sheikh Isa bin Salman Al Khalifa after whom the award is named – which recognises the services of charities across the world once every two years. The Isa Award "emphasises humanitarian openness to various races and religions and avoids politics and conflict of any kind", the press release explained.

“The winning institution for this edition of the award is the largest Pakistani charity foundation, known worldwide for its humanitarian work. It serves all human beings from all races, religions and nationalities without distinction. It was founded by Abdul Sattar Edhi, a well known Pakistani philanthropist, ascetic, humanitarian, and social activist. He is known as the “father of the poor” and “the angel of mercy”, and has been repeatedly nominated for the Nobel Prize for Peace,” the statement adds. The Edhi Foundation was established by late Abdul Sattar Edhi, who selflessly devoted his entire life to serving humanity. Edhi passed away on July 8, 2016, following renal failure, leaving entire Pakistan in sorrow and grief. In respect of his relentless services to humanity, he was given a state funeral. His funeral prayer was arranged in Karachi’s National Stadium, which was attended by thousands of his admirers and followers.