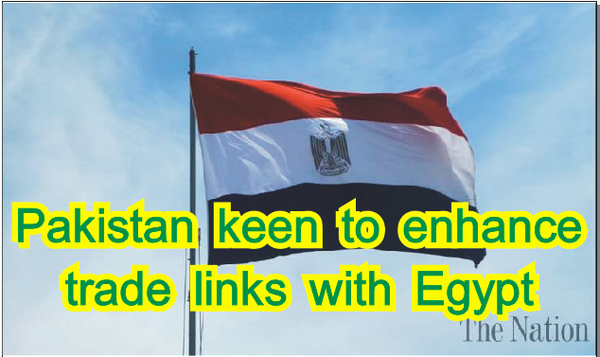 The Ambassador of Egypt Ahmed Fadel Yaqoub on Wednesday met the Deputy Chairman Senate in a meeting at the Parliament House. Deputy Chairman Senate Saleem Mandviwalla has underlined the need for enhancing trade and business links between Pakistan and Egypt for the mutual benefit of the people of two sides. He said that people to people contacts and business and trade links are on the on the lower ebb and both sides need to explore the possibilities of boosting trade and economic cooperation.

He said that both countries enjoy cordial relations since 1948, however, the trade volume remains below the mark. He said that cultural similarities can help in building a long lasting economic cooperation. He proposed to promote tourism between the two countries. He said that parliamentary diplomacy can help in bringing the people of two sides more close and build on the existing ties.

He emphasized frequent exchanges at parliamentary and other levels. Deputy Chairman Senate said that Pakistan appreciates Egyptian support on Kashmir issue. He said that both Pakistan and Egypt enjoy excellent cooperation at international forums.  Deputy Chairman Senate underscored the need for making joint efforts to promote peace and security at regional and global level. Egyptian Ambassador said that enhanced institutional linkages and bilateral contacts would further pave the way for exploring new avenues of cooperation.  He informed the deputy chairman senate about the initiatives to boost cooperation between Islamabad and Cairo.