Erdogan accuses the West of 'standing by terrorists' in Syria 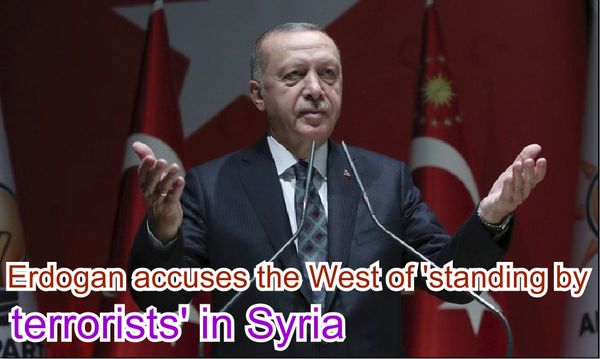 Turkish President Recep Tayyip Erdogan on Monday lashed out at Western states, accusing them of “standing by terrorists” in failing to support Turkey's operation against Syrian Kurdish fighters.

“Can you imagine the whole West stood by the terrorists and all attacked us including Nato member states and European Union countries?” Erdogan said in Istanbul.

“Since when did you start to side with terror? Did PYD-YPG (Syrian Kurdish forces) join Nato and we do not know about it?” he asked.

Ankara says the YPG is a “terrorist” offshoot of the outlawed Kurdistan Workers' Party (PKK), which has been waging an insurgency inside Turkey since 1984.

The PKK is blacklisted as a terror group by Ankara, the United States and the European Union.

Ankara's military action against Kurdish forces who played a key role in the fight against the militant Islamic State (IS) group has drawn widespread international criticism and prompted some Nato countries to suspend new arms sales.

Nato Secretary General Jens Stoltenberg has repeatedly voiced “serious concerns” about the military operation launched on October 9 to push Syrian Kurdish forces back from the border.

Erdogan denied any territorial ambition saying: “Turkey does not have an eye on any country's territory ... We consider such an accusation as the biggest insult directed to us.”

Turkey has announced a 120-hour suspension of the offensive following a deal with US Vice President Mike Pence, under which Kurdish fighters were to withdraw to allow a “safe zone” to be set up along the border.

Erdogan was to meet Russian President Vladimir Putin on Tuesday in the Black Sea resort of Sochi.