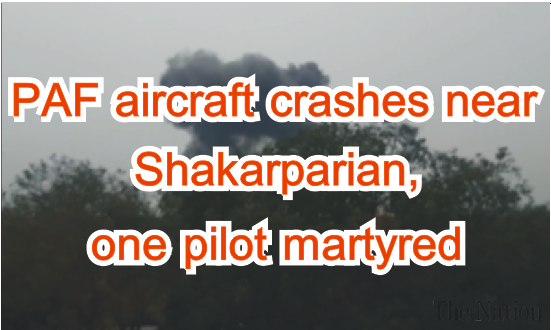 Pakistan Air Force reports with regret that a PAF F-16 aircraft crashed near Shakarparian, Islamabad during the rehearsals of 23rd March parade. According to a PAF spokesperson, Wing Commander Noman Akram has embraced martyrdom in the incident. Rescue teams have also been dispatched to the site. A board of inquiry has been ordered by Air Headquarters to determine the cause of accident.

President Dr. Arif Alvi and Prime Minister Imran Khan on Wednesday expressed their deep grief over the martyrdom of Wing Commander Nauman Akram as a result of PAF fighter jet crash in the federal capital. The President and the Prime Minister in their separate messages prayed for the departed soul and for the fortitude of the deceased family. According to a Spokesperson of Pakistan Air Force, a PAF F-16 fighter jet crashed near Shakarparian, Islamabad on Wednesday during the rehearsal of March 23 annual parade.