Azadi March to transform from sit-in to 'nationwide protests' 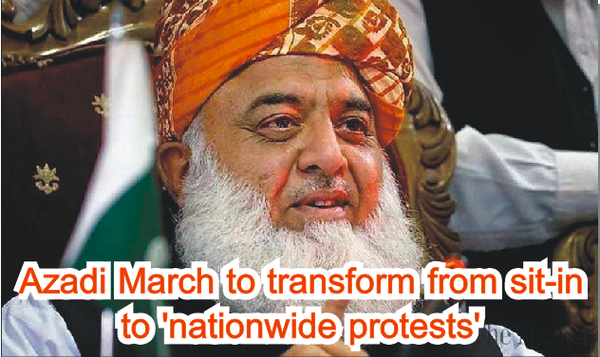 On Tuesday, the Jamiat Ulema-e-Islam Fazl (JUI-F) chief Maulana Fazl-ur-Rehman made the announcement that his party's sit-in in Islamabad will now be expanding into nationwide protests. Calling it the "Plan B" of the Azadi March, Rehman made the announcement while addressing protestors participating in the sit-in in Islamabad.  “We will be leaving here tonight and will stand beside you (protesters), so the Azadi March proceeds successfully. Your presence here has pulled out the roots and the next step will be to root out the stem. Give one more push to the already falling walls,” he said to the crowds.

To those who had not been able to join the sit-in, the JUI-F leader said that they could now protest wherever they were in Pakistan, as its strategy was now to block highways across the country. Soon after the announcement, Azadi March participants began to gather their possessions and packed tents, as they now leave the H-9 area of the sit-in in Islamabad.