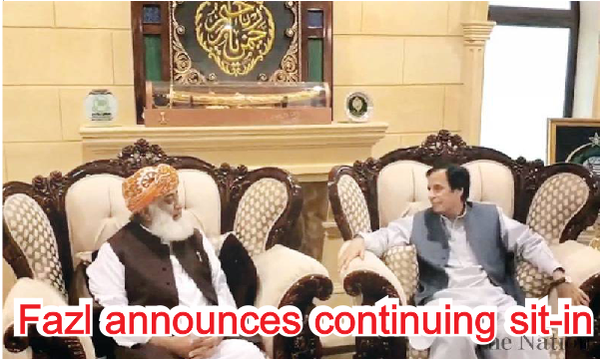 ISLAMABAD - JUI-F chief Maulana Fazlur Rehman on Wednesday announced continuing their protest sit-in until they get their ultimate goals.The Jamiat Ulema-e-Islam-Fazl (JUI-F) led a protest march of opposition parties from Karachi to Islamabad the other week and the party activists have since been staying in the federal capital.The sit-in has turned out to be a solo show of the JUI-F as other parties did not mobilise their cadres for the anti-government march.More significantly, the two key opposition parties - Pakistan Muslim League-Nawaz and Pakistan Peoples Party - are against camping in the capital for an extended period of time. But Fazl is insistent at keeping the pressure on government through maintaining their presence there.Addressing the charged party activists yesterday, the JUI-F leader claimed that the nation wanted to get rid of the incumbent government. He said that despite heavy rain and cold weather the protesters were continuing their demonstration and they will stay put to achieve their objective.

The head of the religio-political party said that the Azadi March will be converted into Seerat-e-Tayyaba conference on 12 Rabiul Awal, showing that he was in mood to end the anti-government protest any soon.He said that they did not want any clash with the state institution as all of them were equally respectable for them. Without naming Pakistan Army, he urged it to stay impartial and work while remaining within the line drawn by the constitution.Fazl said that the country was passing through a period which was shameful for the whole nation. The country was facing multiple crises because of the failed policies of the government, he maintained.Criticizing the foreign policy of the government, he said that the Pakistani diplomatic staff in Kabul had received threats and claimed that Pakistan Foreign Office had not even recorded any protest on the issue.

Commenting on the economy of the country, he said the government was not capable of pulling the country out of the financial crisis. He claimed that Pakistan was fast heading to bankruptcy.He said that three budgets were presented in one year but the country was still in danger zone. If another budget was presented by this government, it would sank the ship of country’s economy, he added.A delegation of lawyers led by the newly-elected president of Supreme Court Bar Council Qalbi-e-Hassan also visited the sit-in as a sign of solidarity with the protesters.Commenting on the judicial system of Pakistan, Fazl Rehman said that the country had been deprived of impartial and equal justice system. The court verdicts were scripted by a specific group of people who were holding the judiciary hostage, he alleged.

JUI-F chief said that the judges like Justice Qazi Fazi Isa and Shaukat Siddique who wanted the supremacy of the law and constitution and dreamed for a free and fair judicial system have been barred from making impartial decisions.He claimed that the “fake and selected government” had been rejected by the young generation of Pakistan as it failed to provide them jobs and give shelter to the poor as the ruling party had promised to the people before coming into power.Instead of providing jobs and shelter to the citizens, the PTI government had snatched from them whatever they already had, he added.JUI-F chief said on one hand Hajj had been made more expensive for the Muslims while on the other hand Sikhs were being allowed to visit the country without any visa fee.Ironically, he said, the government was going to inaugurate the Kartarpur Corridor on November 9, which is the birthday of prominent Muslim leader and proponent of Two Nation Theory, Alama Iqbal.

He asked if the nation be celebrating the Guru Nanak Day or Ranjeet Singh Day on Nov, instead of celebrating the birthday of Alama Iqbal, he added.Addressing the gathering, Pakhtunkhwa Mili Awami Party (PkMAP) chief said that they were there at the sit-in for the civil supremacy. He added that they were not against Pakistan but were fighting for the equal rights of the citizens.He said that they had often been labelled as terrorists and anti-state elements, though they were in fact victims of terrorism.Opposition leaders including PML-N senior leader Ahsan Iqbal and PPP Nayyer Bukhari also addressed the crowd.

After a meeting with JUI-F chief on Wednesday, Punjab Assembly Speaker Chaudhry Pervaiz Elahi expressed the hope of a positive outcome of their talks.A day earlier, Fazl had visited the Chaudhry’s residence and held a meeting with Elahi and PML-Q chief Chaudhry Shujaat Hussain. On Wednesday, Elahi called on Fazl at latter’s Islamabad house.The PML-Q leader said that progress was being made on different contentious issues and he was hopeful of their ultimate success. However, he said, the process would take some time and people should not expect an early breakthrough.