EU allows PIA to operate flights to Europe till July 3 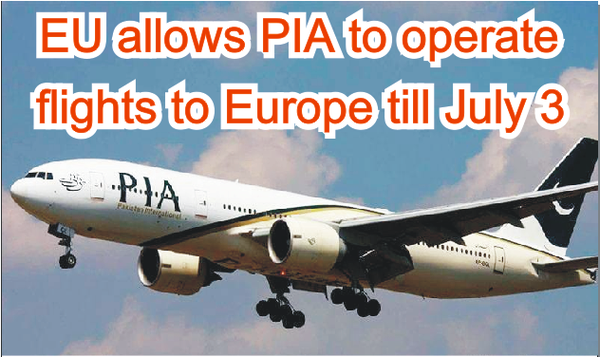 The European Union has allowed the Pakistan International Airlines (PIA) to operate flights to and from Europe till July 3, confirmed the national flag carrier's spokesperson on Wednesday. The spokesperson said that all PIA flights to and from Islamabad to London, PK785 and PK 786 will operate as per schedule. An announcement with regard to other flights will be made soon, stated the PIA spokesperson. He confirmed that the PIA administration, Ministry of Foreign Affairs and Pakistani diplomats were in constant contact with European authorities over the matter.

The spokesperson added that the foreign secretary had contacted European diplomats on an urgent basis after which the national flag carrier was allowed to land in Britain, Europe and fly over them as well. The European Union Aviation Safety Agency (EASA) had suspended PIA's air operations permit for a period of six months, the national carrier's spokesperson Abdullah Hafeez Khan had said on Tuesday.