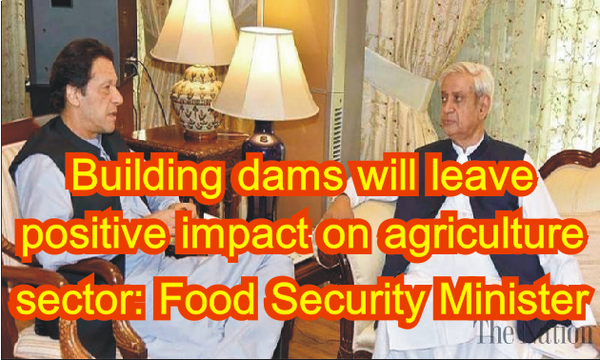 Minister for National Food Security and Research Syed Fakhar Imam has said water is an important ingredient to enhance agriculture growth and meeting this requirement the government has started building dames in the country. Syed Fakhar Imam said there is a plan to provide quality seeds to the farmers in order to enhance per acre yield of major crops such as wheat and cotton.

Winding up discussion on the government’s agriculture policy in the National Assembly, the Food Security/. minister said it will be ensured with the cooperation of the provincial governments that the farmers only use the approved seeds. He said enhancement of agriculture products will also enhance our exports. The minister further said that it is also our effort to improve canal system and on farm water management. He said the construction of Diamer Basha dam will go a long way in overcoming water shortages in the country.

Fakhar Imam said the government has approved a package for the agriculture sector under which the fertilizers will be given to the farmers on subsidised rates. He said it is also our plan to provide subsidy to the farmers in the power bills of tube wells. Regarding the prices of wheat flour, Fakhar Imam said the prices of the commodity have stabilized in Punjab due to the releases made by the provincial government. He said the government has also allowed the private sector to import the wheat.

The house has been adjourned to meet again on Monday at four pm. PTI member Parliament Sardar Zulfiqar Ali Khan said agriculture is an important sector and the government should pay attention on this sector as well. He stressed the government attention to improve research culture in higher education sector.