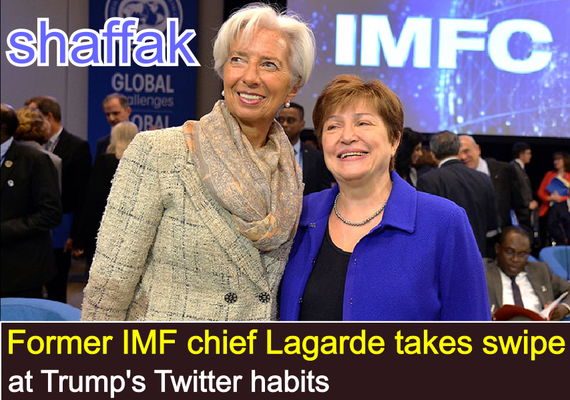 Lagarde, who takes over leadership of the European Central Bank on November 1, called for world leaders to act like grownups and negotiate a solution to the trade conflicts, and called for “rational decisions”.

Newly freed from the restraints of her previous post, where she would have had to guard her language, Lagarde said, “market stability should not be the subject of a tweet here, a tweet there”.

“It requires consideration, thinking, quiet and measured and rational decisions,” she said of Trump in the interview due to air Sunday night.

Lagarde led the Washington-based crisis lender for eight years and previously was more cautious in comments about Trump since the United States is the main IMF shareholder.

In the interview, she warned that Trump's trade war with China will give the global economy “a big haircut.” “My very, very strong message to all policymakers is please sit down like big men, many men in those rooms and put everything on the table, and try to deal bit by bit, piece by piece, so that we have certainty,” she said, according to excerpts of the interview released by CBS News.

As she takes on the new role as central banker, Lagarde also took a swipe at Trump's barrage of criticism of his own Federal Reserve Chairman Jerome Powell, whom Trump has called a “bonehead” among other insults.

“A central bank governor does best his job if he is independent.”