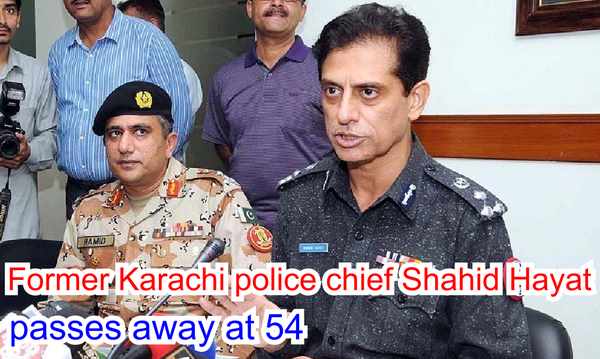 Shahid Hayat, a joint director general at the Intelligence Bureau, passed away on Tuesday at the Aga Khan Hospital in Karachi.

According to a source within the Intelligence Bureau, he had been under treatment for cancer at the hospital.

He had been scheduled to join the Pakistan High Commission in the UK, added the source.

His funeral prayers will be held on Wednesday at the Garden Police headquarters in Karachi, following which his body will be taken to his native town of Dera Ismail Khan for burial.

Sindh Inspector General of Police Syed Kaleem Imam expressed his profound sorrow over Hayat's passing and paid tribute to his services to the police department.

Regarded as a straight-forward police official, Hayat has had many high-profile cases to his credit. However, it was his involvement in the Mir Murtaza Bhutto murder case that kept him in the news for a long time.

Some high-profile cases whose investigation Hayat headed include the supervision of the probe into the Shahzeb murder case, which culminated in the successful custody of Shahrukh Jatoi, since convicted, and his return to Karachi to face trial. Another case related to the arrest of a man known as the ‘white corolla wallah’.

Hayat graduated from Punjab University and briefly joined the police service in Punjab in 1991 before he started his long stint in Sindh Police.