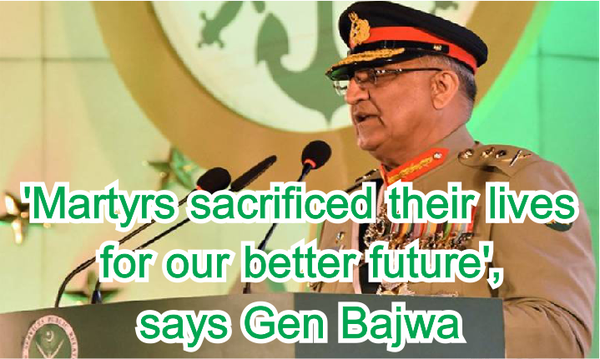 As the country observes Defence and Martyrs Day as Kashmir Solidarity Day on Friday, Chief of Army Staff Gen Qamar Javed Bajwa said that our soldiers stood like a rock wall in the war against terrorists and foiled the nefarious designs of the enemy. They sacrificed their today for our better tomorrow. Beginning his address at an event held at General Headquarters in Rawalpindi, General Bajwa said that it was a matter of pride for him to be speaking on Defence Day.

"From 1947 till now, whether in traditional war or in operations against terrorists, our martyrs offered sacrifices and ensured the safety of the country," the army chief said, adding that their sacrifices have not and will not be in vain. COAS Bajwa further said Pakistan will keep fighting for the cause of Kashmiris till the last bullet and soldier.

“Kashmir is Pakistan's jugular vein and we will never abandon our Kashmiri brethren,” he added.  Calling on the international community to play its part, COAS Bajwa said Pakistan gives the message of peace and today there is an atmosphere of peace in the country. “Pakistan has fulfilled its responsibilities in the war on terrorism and now the responsibility rests with the rest of the world to play its part.”

“A peaceful and strong Pakistan is our destination and we are steadfastly moving towards that end,” COAS Bajwa said, adding the country's armed forces ensured the security of the motherland by rendering sacrifices both in the conventional war and the fight against terrorism. Earlier, the Army Chief laid a floral wreath at the martyrs’ monument. Bereaved families of the martyrs were invited to attend the main ceremony.

Today marks the 54th anniversary of the 1965 Pakistan-India war when the nation's forces defended the country from an Indian attack on Pakistani soil. This year, the day is being observed to pay tribute to the country’s martyrs and to reaffirm commitment to defending Pakistan against all threats. The day began with a 31-gun salute in the federal capital and 21-gun salutes in the provincial capitals. Special prayers were also offered after Fajr prayers for the independence of occupied Kashmir as well as for the progress and prosperity of Pakistan, Redio Pakistan reported.