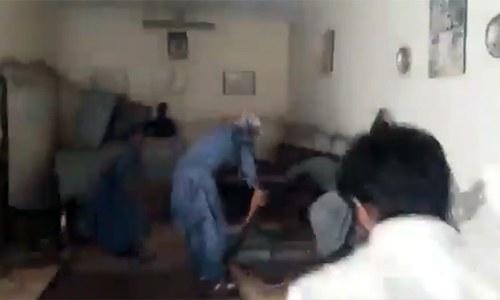 A probe committee formed to unearth the facts surrounding the violence which broke out in Ghotki earlier this month has found that the attacks were a conspiracy to "foment communal riots in the area", according to a report released by the human rights ministry on Friday.

A fact finding delegation was formed on the directives of Human Rights Minister Shireen Mazari after a general feeling of resentment was observed among the Hindu community.

The resentment arose following a blasphemy accusation which led to violence and vandalisation of Hindu temples in the district, as well as the mysterious death of a student in Larkana which remains unsolved.

The team includes the following members:

The team visited Ghotki, Sukkur and Larkana to probe the incidents that took place and to find out what apprehensions the local community members have.

At the Sant Satram Dham temple in Ghotki, the delegation met community leaders and assured them protection and justice for the Hindu community and described the attacks as a "conspiracy to undermine the communal harmony in the area".

The community demanded an impartial inquiry into the alleged blasphemy case so that "fair action" may be taken in accordance with the law. It questioned how a teacher, who has been teaching students for the last thirty years — a majority of them being Muslims — could commit blasphemy.

"They also demanded stern action against the accused who attacked the temple, looted shops, tried to violate sanctity of homes" and caused an adverse law and order situation leading to fear and harassment among the community, according to the report by the ministry.

Appreciation for local Muslims who "came to their rescue and guarded their homes overnight, defeating the miscreants" was also shown by the Hindu delegation.

The team also met the Ghotki Senior Superintendent of Police (SSP) Farrukh Ali, who briefed them regarding the incidents and the current law and order situation. He assured the delegation the police would ensure that such incidents are prevented in the future.

Meetings with "various impartial people" were also held. "It appeared during the discussion with administration and civil society that the attack on the temple and riots were planned a night earlier".

According to the delegation's findings, "there were reports of political motivation, with ulterior motives and a few political personalities were backing the miscreants".

Notan Lal, the teacher accused for blasphemy, "was active in supporting a political party in the recent Ghotki by-elections", the report said.

The fact-finding delegation was also of the view that "police were lenient while applying relevant sections in the FIR" and that they did not take into account that the attacks "were planned and a few influential persons were involved".

According to the report, the police "took their all-out efforts to control the situation, however, few concessions were made to cool it down".

The team has recommended that a judicial probe be ordered to ascertain whether the blasphemy law was misused against Lal. The probe should also determine if the ensuing riots "were not a result of planned conspiracy to disturb the peace of Sindh".

The probe must also shed light on the recurrent complains of the Hindu community, the team concluded.

Section 34 of the Pakistan Penal Code along with Section 295-A is recommended to be applied in the blasphemy case against miscreants who attacked the temple. Under Section 295-A, the punishment is imprisonment for a term which may extend to ten years, or a fine, or both.

The administration has been instructed to not hesitate to call paramilitary forces to control such incidents in future.

The judgment given by the Supreme Court on June 19, 2014 regarding the protection of minorities "must be implemented in letter and spirit", it was further recommended.

A meeting with the family of Nimarta, the student found mysteriously dead in Larkana on September 16, was also held. The probe team expressed their deep condolences over the student's sorrowful death and assured the family that "every possible step would be taken to provide them justice".

A separate meeting with Nimarta's father was also held. The father, for unknown reasons, expressed his reluctance to file a complaint with the police. He, however, insisted that the girl was murdered.

A briefing by Larkana SSP Masood Ahmed Bangash was also provided to the delegation. SSP Bangash said that the case is under investigation and said that an FIR had yet to be lodged. He informed the team that the home department has instructed the district and sessions judge to launch a judicial probe into the matter.

The hostel at Asifa Dental College, where Nimarta had been studying, was also visited to gather details.

It was found that there was a lack of appropriate measures of security at the hostel, including no presence of CCTV cameras.