Government not afraid of JUI-F march but its timing is wrong, says Qureshi 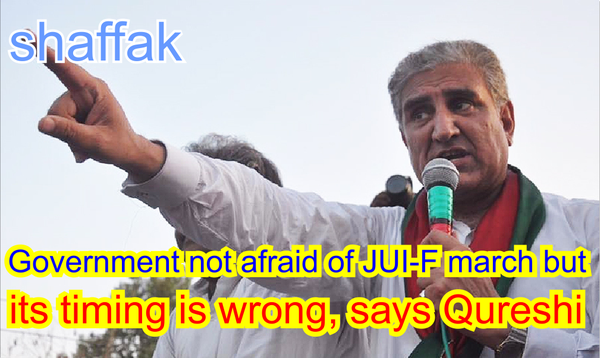 Foreign Minister Shah Mahmood Qureshi on Monday said that the government was "absolutely not afraid" of the Jamiat Ulema-i-Islam-Fazl's (JUI-F) upcoming 'Azaadi March'.

Talking to reporters in his hometown of Multan, the minister said: "It is their (JUI-F) democratic right but I had said earlier and I repeat that the timing is wrong, the date is not suitable."

"October 27 is the cursed and black day when India occupied Kashmir. It is the day when Indian forces invaded Kashmir, so the day is observed as a Black Day every year," he said.

Qureshi added: "The sentiments of the Kashmiri people will be hurt if the JUI-F links the day to domestic politics.

"The nation is not liking their decision for October 27," he said, adding that in his opinion, there is no need for this protest because the international focus is already on Kashmir.

The conduct of opposition parties on the issue of Kashmir is their political need, the minister said.

Further talking about the Kashmir issue, he said, "I don't think that India is in position to allow anyone to visit [occupied] Kashmir, where they have imposed a curfew, where basic rights are suspended."

The minister said that the senator also expressed his desire to visit Azad Jammu and Kashmir and he was facilitated in this regard. The minister made it clear that if anyone, particularly from the United Kingdom Parliament and the European Union want to visit the AJK, he or she will be facilitated.

He expressed his disappointment over the conduct of Indian judiciary and the media. He added that apparently the Indian media and judiciary are under sheer pressure of Hindu extremists.

The minister while responding to a question said, "Pakistan had briefed the Financial Action Task Force (FATF) in Bangkok about its viewpoint and explained the measures, taken by Islamabad, to the FATF Asia-Pacific Group."

He added that despite Indian efforts to push Pakistan into the blacklist of the FATF, Pakistan's viewpoint and efforts will be recognised in the FATF session in Paris.

Talking about the concerns expressed by the opposition over the pace of projects related to the China-Pakistan Economic Corridor, he said that the opposition often expresses reservations over it but there is no point to worry about.

He said, "The opposition unnecessarily takes the issue up, China is satisfied, Pakistan is satisfied. We have stepped up to the next phase [of the CPEC]."