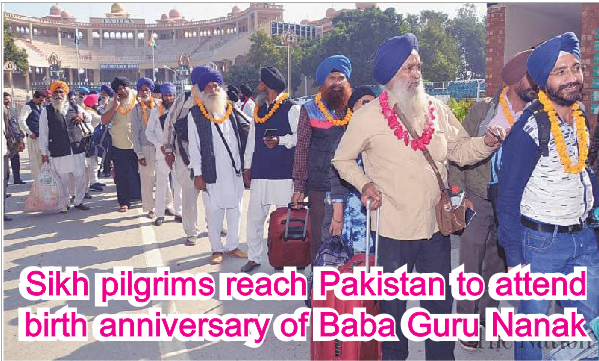 A large number of Sikh yatrees reached Lahore via Wagha Border on Tuesday to attend the 550th birth celebrations of Baba Guru Nanak Dev Ji.  Chairman Evacuee Trust Property Board (ETPB) Dr Amir Ahmed along with Pakistan Sikh Gurdwara Parbhandak Committee's (PSGPC) Sardar Stwant Singh and other officials of the ETPB were present to welcome the Sikh yatrees at the Wagah border. The Sikh yatrees will attend the inauguration ceremony of the Kartarpur Corridor on November 9 and attend the 550th birth celebrations of the founder of the Sikh religion Baba Guru Nanak Dev Ji in Nankana Sahib during their 10 day-long sojourn in Pakistan.

Dr Ahmed said the government has made fool-proof security arrangements for the visiting Sikh yatrees, adding that all kinds of facilities would be provided to them during their visit as per the vision of Prime Minister Imran Khan. Shiromani Gurdwara Parbhandak Committee leader Grumeet Singh Bos told APP that the Sikhs were pleased to arrive in Pakistan, adding that the services rendered by the PM Imran to the Sikh community will be written with golden words in history. Party Leader of Delhi Gurdwara Management Committee Sardar Srojeet Singh Virk said, "We came to Pakistan with a message of love and brotherhood.

On November 12 — the birth anniversary of Baba Guru Nanak Ji — the Sikh yatrees would attend the central ceremony of 'Nagar Kirtan' and 'Bhook Akhand Parth Sahib' at Janam Asthan, Nankana Sahib. The yatrees will depart for India on November 13 and 14 after performing religious rites. Kartarpur is a visa free corridor where Sikh pilgrims can come after getting their passports scanned and bio passport scanned, and bio metric confirmation with a nominal payment of service charges of only 20 dollars per head. The pilgrims will come in the morning and will return in the evening.