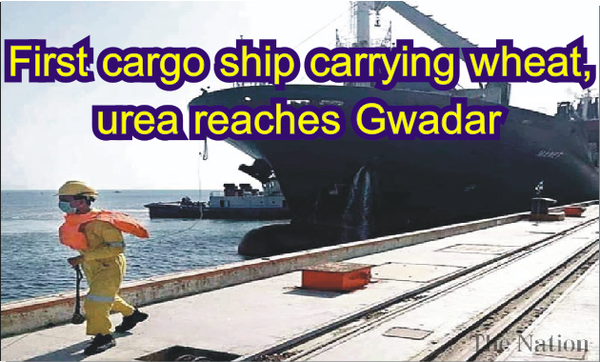 Asim Saleem Bajwa, who is also Chairman CPEC authority, said it is a dream come true for the local economy as it will stimulate a host of business activity. On Friday, Pakistan’s Commerce Ministry said that Gwadar port has been made operational for Afghan transit trade under the Afghanistan-Pakistan Transit Trade Agreement-2010 (APTTA).

In a series of tweets, Advisor to Prime Minister on Commerce and Investment Abdul Razzak Dawood said that directives had been issued to offer jobs and livelihoods to local labourers only. The labourers were engaged in the packing of fertilisers, loading and offloading of the items to trucks.

Apart from fertilisers, Afghanistan will be granted permission for the transit trade of sugar and wheat from Gwadar, while trucks carrying fully sealed consignments will only be allowed to go to the neighbouring country.

The adviser said that that the move fulfills a long-standing request of the business community and the shipping industry of the country. It will also pave the way for generating business opportunities and employment both in Gwadar and the surrounding regions, he added.

The war-torn country has relied on Pakistani land routes and the two ports of Karachi and Port Qasim for international trade after a bilateral agreement, known as the Afghan Transit Trade Agreement (ATTA), was signed with Islamabad. However the deep sea port at Gwadar offers a much shorter route for Afghan cargo.

The port is a centerpiece of the of CPEC mega-project being executed with assistance of China to improve connectivity between the two countries in particular and with the whole region in general. CPEC is a collection of projects currently under construction at a cost of more than $50 billion. The major portion will be spent on enhancing the energy capacity of the country and almost $12 billion on infrastructure-related projects.