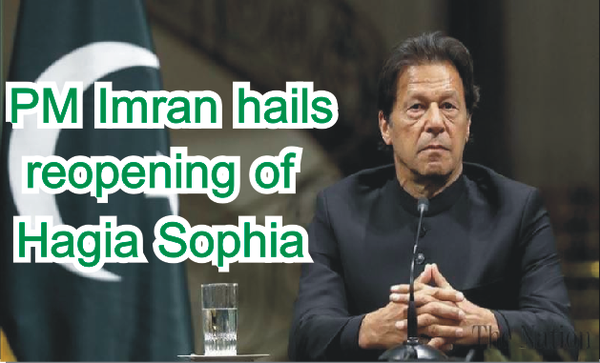 Pakistani Prime Minister Imran Khan on late Friday hailed the reopening of Turkey's historic Hagia Sophia Grand Mosque after 86 years, following a Turkish court ruling. "Felicitations to the Republic of Turkey, and H.E. President Recep Tayyip Erdogan on this historic day after the first prayers in 86 years were held at Hagia Sophia [Grand] Mosque," Khan said on Twitter. Apart from the prime minister, several other Pakistani politicians and lawmakers, including the head of mainstream religious party Jamaat-e-Islami Senator Sirajul Haq, and Chief Minister of the most populous Punjab province Usman Buzdar also congratulated the Turkish government over the landmark move.

The first Friday prayers held in Hagia Sophia Grand Mosque on Friday marked the first acts of worship there in 86 years. Thousands of people took part in the traditional Friday prayers both inside and outside the historic mosque in Istanbul, Turkey’s largest metropolis. Before the Friday prayers, Erdogan recited from the Quran inside the reopened mosque, choosing from both the Surah Al-Fatihah and the Surah Al-Baqarah.

The iconic monument served as a church for 916 years until the conquest of Istanbul, and a mosque from 1453 to 1934 – nearly 500 years – and most recently as a museum for 86 years. One of the most visited historic buildings in Turkey by domestic and international tourists, Hagia Sophia was added to the UNESCO World Heritage List in 1985, during its time as a museum.

On July 10, a Turkish court annulled a 1934 Cabinet decree that had turned Hagia Sophia into a museum, paving the way for its use again as a mosque after an 86-year hiatus.  In the new era for Hagia Sophia, Turkey’s Religious Affairs Directorate will oversee religious services at the mosque, while the Culture and Tourism Ministry will supervise restoration and conservation work. The architectural treasure will also be open to both domestic and foreign tourists free of charge.