Siraj praises Erdogan on re-conversion of Hagia Sophia into mosque 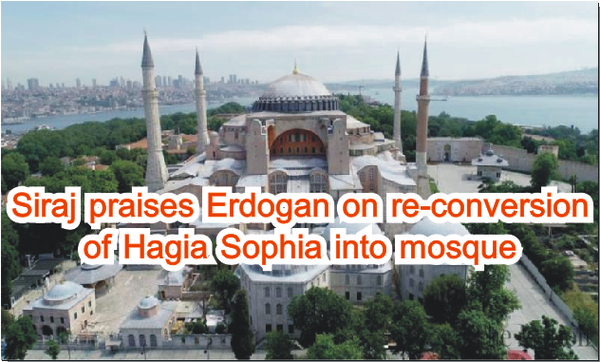 Ameer Jamaat-e-Islami (JI), Senator Sirajul Haq has congratulated the Turkish President Rajab Tayyab Erdogan on re-conversion of Hagia Sophia into mosque. In a statement issued from Mansoora on Thursday, he said the entire Islamic world welcomed the decision announced by the Turkish court. Siraj said those who were crying foul on the step should instead take up the issue with Israel for its occupation of mosques and Islamic buildings.

He said Turkey government corrected the history and restore the building status into its original form. He said no one was banned to go to Hagia Sophia mosque now as its historical status as building would remain intact. Meanwhile, JI chief visited Jamia Faradia in Islamabad and said the religious seminaries were fortresses of Islam.

He asked the government to stop step-motherly treatment with the Madaris and provide them all the benefits being enjoyed by the other educational institutions of the country. He said the rulers badly failed to fulfill their responsibilities regarding Madaris which were providing free education, food and shelter to 3.5 million students in various areas.

Siraj said closure of religious seminaries for indefinite period was causing damage to the education of the thousands of students besides the step aimed at depriving the teachers from earning their livelihood. He said government should announce the compensation package for students and teachers of Madaris. The western and secular mindset, he added, always labeled the seminaries as bastion of terrorism contrary to the fact that never a single terrorist was arrested from any religious seminaries in past. There was need to act against this baseless propaganda against the seminaries, he emphasized. He said the JI was fully supporting the demands of the seminaries.

A delegation of JI Youth Northern Punjab called on Senator Siraj and discussed the political situation. The led by Awais Aslam Mirza informed Siraj about JI youth relief activities in Corona affected areas. Talking on occasion, he said the government failed to provide relief to the poverty stricken masses. He asked the JI workers to make preparation for the local government elections. He said the JI would turn Pakistan a real Islamic welfare state.