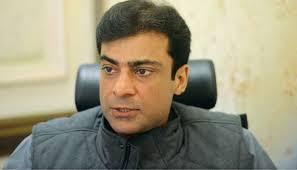 An accountability court in Lahore on Tuesday rejected a plea by the National Accountability Bureau (NAB) for an extension in the physical remand of Hamza Shahbaz, sending him to Lahore's Camp Jail on judicial remand in a case of alleged money laundering and assets beyond means.

NAB had appealed to the court for a five-day extension in Hamza's physical remand, who has been in the bureau's custody since June 11. The PML-N leader was present in court during today's proceedings which were led by Judge Ameer Mohammad Khan, and was asked to stand in the defendant's box.

The court then asked the NAB counsel to explain why a physical remand was sought.

"We have obtained some records from the Punjab chief minister's office," the accountability watchdog's investigation officer replied. He said that two individuals, namely Ali Ahmed Khan and Meher Nisar Ahmed Gul, were employed at the office and it was on their names that Hamza had set up two benami companies.

The officer went on to say that records were requested from the Federal Board of Revenue (FBR), Securities and Exchange Commission of Pakistan (SECP) and other institutions which NAB has now received.

"Have you also obtained records of the Chiniot property?" the judge asked referring to the Ramzan Sugar Mills, to which the NAB officer replied in the positive.

"We need Hamza Shahbaz's physical remand to complete our investigation," the officer said.

According to NAB, Hamza and his younger brother Salman Shahbaz being directors of the sugar mills got a bridge constructed out of public money in Chiniot which directly linked to their mills.

Meanwhile, Hamza's counsel argued that the two individuals named by the investigation officer "have no link with the case" and that NAB is "only spinning tales".

The counsel urged the court to reject NAB's plea and instead place the PML-N leader in judicial custody.

At the conclusion of the hearing, the court rejected the accountability bureau's request and ordered that Hamza be sent to jail on judicial remand.