25 Mythic Creatures That Never Existed But People Believed In Anyway 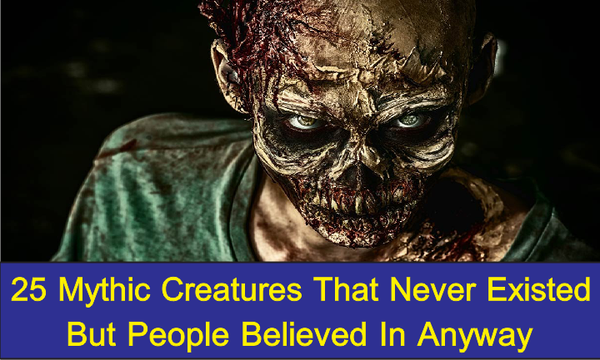 Throughout history there have been countless stories about mythical creatures, legendary monsters, and supernatural beings. Despite their unclear origin, these mythical creatures have a place in folklore and in many cases are part of pop culture. Amazingly, there are people across the globe who still strongly believe these creatures exist in spite of the lack of proof that they do. So, our list today is about 25 legendary and epic mythic creatures that never existed yet many people believe otherwise.

The Bubak is pretty much to Czech tales and folklore what the bogeyman is to Western European and American folklore. It was usually described as a creepy creature resembling a scarecrow, and could cry just like an innocent, unprotected baby to lure its victims to their deaths. Also, some of the most popular tales regarding the Bubak always take place on the night of the full moon when the Bubak supposedly weaves cloth from the souls of those he has killed and, like an evil version of Santa Claus, drives a cart pulled by black cats.

The ghoul is one of the most well-known creatures in Arabian folklore and we were introduced to it in the collection of tales, One Thousand and One Nights. The ghoul is described as an undead monster that can also take the form of an immaterial spirit and usually goes into graveyards to eat the flesh of the recently dead. This is probably the main reason why the word ghoul is associated in Arabic countries with anything macabre and they often use the word when referring to a gravedigger or any profession directly related to death.

In a free translation from Japanese to English Jorogumo means the “whore spider,” and in our humble opinion that name describes this monster perfectly. According to Japanese folklore, a Jorogumo was a blood-thirsty monster, but in most tales it is described as a huge spider that takes the form of a very attractive and sexy woman who seduces her male victims, traps them in her web, and then devours them with pleasure.

In Greek mythology, Cerberus is the guardian of Hades and is usually described as a bizarre-looking monster that looks like a dog with three heads and a tail whose end is a dragon’s head. According to the ancient tragedian Aeschylus, Cerberus was born from the union of two monsters, the giant Typhon and Echidna, which would make Cerberus brother of the Lernaean Hydra. Cerberus is not considered an evil creature that hurts people intentionally, but a creature that ensures the arrival of the dead to the underworld and prevents the living from entering Hades. Cerberus is also often described in myth as one of the most loyal guards in history and is often mentioned in Homer’s epics.

The legend of the Kraken came from the Nordic seas and its presence was initially limited to the coasts of Norway and Iceland. With time, however, its notoriety grew, thanks to the wild imagination of storytellers, which caused later generations to believe it also lived in other seas as well.

The Norwegian fishermen originally described the sea monster as a gigantic animal that was as big as an island and presented danger to passing ships not from direct attack but from the giant waves and tsunamis that its movements could cause. Quickly, however, people began spreading stories about the monster’s vicious attacks and aggressive behavior, which destroyed every ship that had the misfortune of passing through its waters. As for modern historians, they seem to be pretty sure that the Kraken was nothing more than some giant squid and the rest of the stories were nothing but the sci-fi creation of a wild imagination.