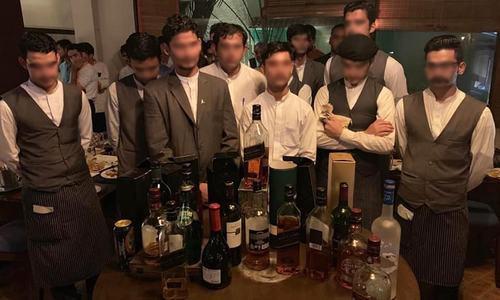 A well-known food outlet in Lahore was sealed on Saturday for allegedly violating the ban on the serving and sale of alcoholic beverages, police said.

Police arrested 13 people and filed a criminal case against the outlet’s administration, according to SP Malik Imran.

According to the FIR, a copy of which is available with DawnNewsTV, the joint raid by the police and excise and taxation department was conducted on Cafe Aylanto on the directives of the Lahore commissioner.

On the basis of a tip-off, the commissioner had tasked Assistant Commissioner Revenue Muddassar Nawaz to take action against the cafe if any illegal activity was taking place there.

The high-ups discussed the matter and constituted a raiding party. To further investigate the matter, undercover agents were sent to the restaurant. The undercover agents purchased foreign liquor worth Rs12,000 and signaled the two assistant commissioners who then initiated legal action.

A police party, meanwhile, remained alert outside the cafe to avoid any untoward action. A large number of liquor bottles were seized and the restaurant staff as well as some customers were placed under arrest.