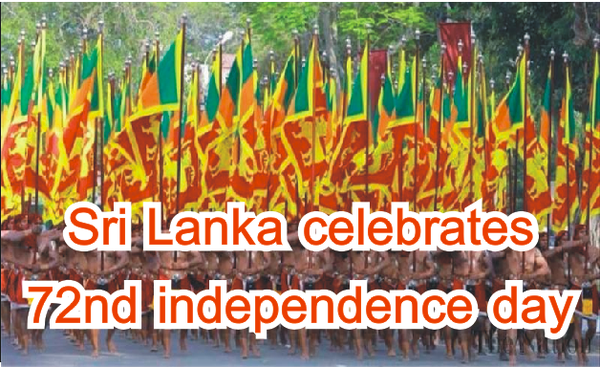 Sri Lanka on Tuesday marked its 72nd Independence Day, with the main celebration event held at the iconic Independence Square in Colombo. The ceremony -- themed A Secured Nation – A Prosperous Country -- was held under the patronage of President Gotabaya Rajapaksa, his first Independence Day commemoration since taking office in November last year. The event brought together 2,500 guests -- including Prime Minister Mahinda Rajapaksa, members of parliament and diplomats as well as Russia’s Commander-in-Chief of the Land Forces Gen. Oleg Salyukov. The event also featured military pageantry, cultural dances by students and civil society organizations.

In his address to the nation, President Rajapaksa said he will not allow any form of extremism or terrorism in his country. “We have paid special attention to strengthening the National Security and Public Security. We will not allow extremist organizations that pave the way for terrorism to further function in the country,” he added. The president also pledged to further strengthen the freedom of all his citizens. “Sri Lanka is a Unitary State. It is a free, sovereign, independent and democratic Republic. On this occasion when we celebrate 72 years of Independence after nearly 500 years of imperialist colonial rule, I address you as the Head of the State with a pledge to further strengthen your freedom,” he said.

Rajapaksa also paid tributes to all the Sinhala, Tamil, Muslim, Malay and Burgher leaders who dedicated themselves to achieving and ensuring this country’s independence from British rule in 1948. “We will always ensure their right to think freely, hold independent opinions, and express themselves without any hindrance. We will always respect the right of every citizen to follow the religion of his or her choice,” he added.The president also called for a strong executive and legislature and an independent judiciary. “A strong executive, a legislature and an independent judiciary is essential for the well-being and advancement of any democratic society,” he said, adding loss of public confidence in any of these key institutions could give rise to anarchy.