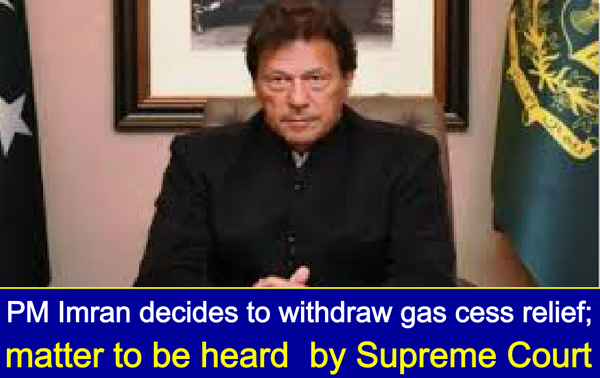 "An ordinance was issued with a view to recover fifty per cent of the stuck revenue by way of an out-of-court settlement after consultation with the industry," read the handout by the Prime Minister's Office.

"However, in view of the recent controversy, the prime minister, in the interest of transparency and good governance, has decided to withdraw the said ordinance," it added.

The attorney general has been asked "to move an application for urgent hearing in the Supreme Court, so that the matter is decided at the earliest, strictly in accordance with the law and the Constitution".

According to the PM office statement, the total amount under dispute in the GIDC litigation from January 2012 to December 2018 is about Rs417 billion.

"In the first round of litigation, the Supreme Court was pleased to annul the GIDC statute. The federal government’s review petition was also dismissed by the Supreme Court. Thereafter, fresh legislations were brought about, which are presently under challenge before the provincial high courts and a set of appeals is also pending in the Supreme Court," the handout pointed out.

The prime minister, has however warned people that taking the matter to court "carries a risk because the decision could go either way".

This means that the entire disputed amount could either be recovered or the entirety of it lost, with the government "possibly forgoing any prospect of future revenue collections under this head".

Furthermore, the government would then have to bear the burden of administering refunds of Rs295 billion of the principal amount, the statement has cautioned.

The PTI government had promulgated a presidential ordinance on August 27 for the out-of-court settlement of a Rs420bn GIDC dispute with industries. The ordinance allowed the general industry, fertiliser sector and CNG sector to pay 50pc of their outstanding bills within 90 days in advance and secure 50pc discount on future bills provided they withdraw their court cases.

Special Assistant to the Prime Minister on Petroleum Nadeem Babar had said the government was expecting net receipts of Rs150-Rs160bn under the proposed amnesty provided all the stakeholders availed the government offer.

The minister had said the 50pc discount offered to the industry through the ordinance was not something new, as the previous government had struck a deal with the CNG industry on the same lines in March 2018.

Babar had said that the government would have never opted for this if there were no multiple stay orders in high courts for years and no final decision in sight.

Also, he had said, the government had received only 15pc of the billed amounts with the remaining 85pc being stuck in courts.

But the government had come under pressure since the waiver was announced for allowing a 50 per cent discount without a pre-audit.

After consultations were held between the federal cabinet members, the law ministry was directed to consider an amendment to the ordinance to ensure forensic audit before extending the lucrative Rs210bn amnesty to big businesses.

Now the matter shall be pursued by the Supreme Court, as stated in the PM Office handout.