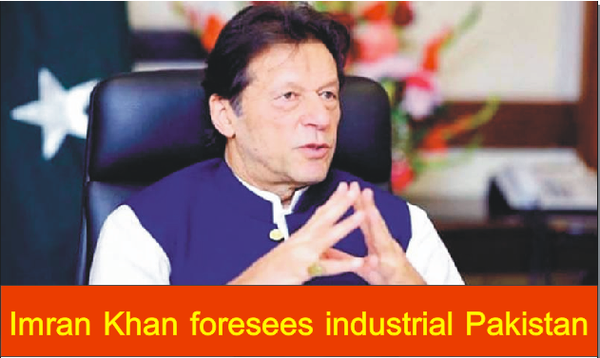 ISLAMABAD  - Prime Minister Imran Khan on Friday said that economy of the country was on the path to recovery as cases of coronavirus are declining.  “Today, the economy is working as well as the coronavirus cases are declining,” said PM Imran, in a televised address to the nation. The PM explained the measures taken by the government to reduce the price of electricity will lead to a significant improvement in Pakistan’s economy. He also appreciated the people of Pakistan for taking precautions against the coronavirus, though warning people that the infection had still not been defeated.

The Prime Minister said that he was seeing an “industrial Pakistan” in the future and believed that the country will reach its goals and destination in the years to come. Prime Minister said that the coronavirus had affected exports of countries around the world yet the opposite happened in the case of Pakistan.  “The world’s exports started to go down, ours increased during the coronavirus,” he said. “When the government was formed, there were no foreign exchange reserves. It was difficult to repay loans,” said the prime minister.

He assured the people that he understands the difficulties they were going through before and currently as well. “The good news is that economic conditions were improving. The stock market has started performing better due to people’s confidence in the country,” he added.  Separately, in a series tweets on Friday, the Prime said Prime Minister Imran Khan said that our journey towards Quaid-e-Azam’s Pakistan has begun for rule of law and towards an Islamic welfare state, premised on compassion. He congratulated the nation on its 73 years of Independence.

The Prime Minister also congratulated the nation on successfully tackling Covid-19 and upturning the economy after two years of struggle.  He said poor people were protected through cash support and smart lockdowns. He said Current Account and Fiscal deficits are down and construction industry is taking off because of the government’s special incentives. He said stock market; exports, revenues as well as sales of cement and car are up.

The Prime Minister also congratulated the nation on fixing the damaging structure the government inherited in power sector.  He said after long negotiations, we have signed new agreement with IPPs which will bring down cost of power generation and reduce circular debt. He said next reform target is power distribution system.

In his message to brave Kashmiri brethren, the Prime Minister said our nation stands united with them in their just struggle to self-determination. He said we will provide them with all the support at all levels as they valiantly fight India’s illegal occupation.

Also, Prime Minister Imran Khan has urged the youth to learn the invaluable lesson of truth, justice and valiance to lead the world. In his tweet on Friday, he also referred to the poetry of Philosopher Poet Allama Iqbal which reads: “Sabq Phir Par Sadaqat Ka, Adalat Ka, Shujaat Ka Liya Jaye Ga Tujh Say Kaam Duniya Ki Imamat Ka.” Imran Khan said this was also the message that he gave to the youth in Dharna (sit in).