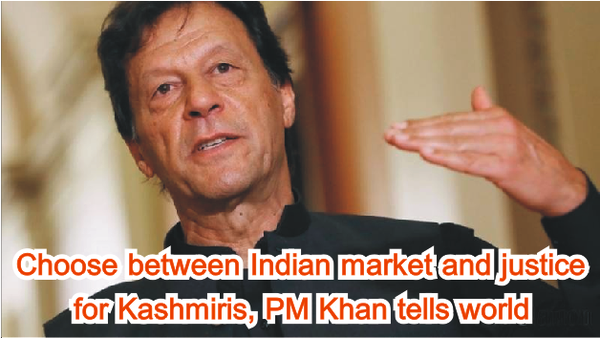 The Pakistani Prime Minister Imran Khan called upon the world to decide between the more than 1 billion strong Indian market, or justice for the Kashmiri people.

The Pakistan premier was addressing the 74th session of the United Nations General Assembly in New York. Islamophobia, climate change, world peace, and the conflict over Kashmir with India were the highlights of his speech.

Saying that India illegally revoked article 370 that granted Kashmir a special autonomy, PM Khan notified the world that the total number of India forces in the occupied valley stood at 900,000.

“RSS was an organization that was inspired by Adolf Hitler and Mussolini,” he said. “All that I am saying can be verified. You can google it. This RSS believed in the ethnic cleansing of Muslims.”

The Pakistan prime minister also said that it was this "ideology of hate" that ended up in the murder of the "great Mahatma Gandhi", in reference to the Indian leader's murder by an RSS cadet. The RSS believed Gandhi was overly sympathetic towards the plight of Muslims after partition, and felt that Gandhi would end up pressuring the government of India to concede too much to the newly-independent Pakistan. Gandhi was involved in ensuring Pakistan was properly repatriated.

“Seventy thousand [Pakistanis] were killed in a war that we have nothing to do with. So when we came to power we decided that we will dismantle the groups what was left of them,” he also said, in reference to the US-led war on terror.

“We decided that there would be no militant organizations in Pakistan.”

Speaking of hatred towards Muslims, the Pakistan premier said Islamophobia had grown at a pace after the September 11, 2001 attacks in the United States.

“There are 1.3 billion Muslims in the world. It is creating a division,” he said. “Muslim women wearing Hijab has become an issue in some countries. It started after the 9/11 [attacks].”

PM Khan maintained that terrorism had nothing to do with any religion. He said Muslims were being marginalised in Europe.

“We all know marginalization leads to radicalism,” the prime minister said. “We must address this issue. No religion preaches radicalism.”

He said Prophet Muhammad (Peace Be Upon Him) created the state of Medina, which served as the basis of a Muslim civilization.

“I hear strange things about Islam that it is against the women and minorities. In Islam, Prophet Muhammad (Peace Be Upon Him) announced that everyone is free to practice his religion.”

The prime minister also attempted to give his own explanation to the world as to why Muslims react as aggressively when someone blasphemes against sacred figures of Islam.

On climate change, he said so many leaders had talked about the issue, but he ended up sensing a lack of seriousness.

“We don’t realize the urgency of the situation. We have so many ideas but ideas without funding are mere hallucinations,” PM Khan said.

“Our country is one of the top 10 countries that are most affected by the climate change. Eighty percent of our water comes from the glaciers,” he said.

“These glaciers are melting at a rapid pace. If nothing is done, I fear the people are going to be facing a worse catastrophe.”

He said he felt that the United Nations must assume leadership in this regard.