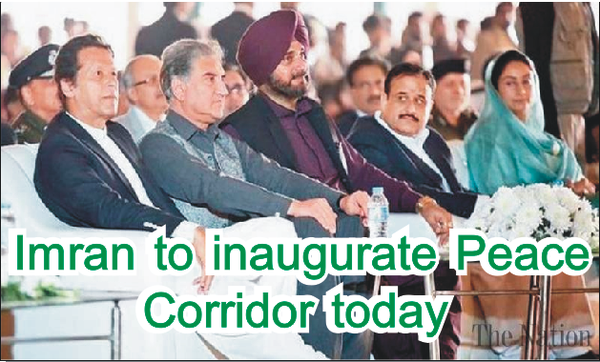 “The inauguration of Kartarpur Corridor is a manifestation of the fact that our hearts are always open for the followers of different religions as enjoined by our great religion and envisioned by our Father of the Nation. Today we are not only opening border but also our hearts for the Sikh community,” he added. He said the unprecedented gesture of goodwill from the Government of Pakistan was a reflection of its deep respect for Baba Guru Nanak Dev Ji and religious sentiments of the Sikh community, who always wanted to have an easy access to the shrine of their spiritual leader and perform their religious obligations. He said Pakistan believed that interfaith harmony and peaceful coexistence would provide an opportunity to work for larger interests of the people of the sub-continent. The prime minister also thanked all those who contributed towards the transforming the vision into reality in record time of 10 months only.

Pakistan has announced visa-free entry for the Silkh pilgrims at a time when the Pakistan and India go through the worst phase of tension. The tension aggravated after India merged occupied Kashmir into its union territory in October. Pakistan protested, calling the step a violation of the United Nations resolutions. The following weeks saw a war-like situation and exchange of fire along the Line of Control. While the tension has not defused despite international calls, Pakistan and India decided to open the Kartarpur corridor as scheduled. International powers, the United States, China and Russia, believe the corridor will help improve the bilateral ties between Pakistan and India. The landmark project initiated on the directives of Imran Khan as a peace-building measure for the region and to promote interfaith harmony, is entirely funded and executed by Pakistan as a gift for Sikh community.

After more than 70 years, Indian Sikhs will now be able to visit one of the religion’s holiest sites by crossing the international border with Pakistan without a visa. The Kartarpur Corridor is a 4.1 kilometre overland passage that links the Dera Baba Nanak shrine in northwest India’s Gurdaspur with the Gurdwara Darbar Sahib in Kartarpur, Pakistan. Defence analyst Abdullah Gul said Pakistan had a great potential of religious tourism and government is focusing to promote tourism in the country. “Another positive development is that the visit of Sikh pilgrims will be visa-free and only a valid identity card will be needed for entering into Pakistan,” he said. Gul said that Pakistan’s Kartarpur corridor initiative was being appreciated by the Sikh community across the world. “The initiative will promote a soft image of Pakistan in front of the world,” he added. He said the initiative by Prime Minister Imran Khan would not only benefit the Sikh community but also help to bring peace between the two nations.

Pakistan yesterday restored the passports requirement for Sikh pilgrims who plan to visit the Kartarpur corridor after India refused to avail Islamabad’s offer. Foreign Office spokesperson Dr Mohammed Faisal recalled that as special gesture on auspicious occasion of 550th anniversary of Baba Guru Nanak, Prime Minister Imran Khan had announced waiver of requirements of passport and registration of pilgrims 10 days in advance. “Unfortunately, Indian side has declined these facilitative measures,” he said, adding: “If India does not wish to avail these facilities it is India’s choice.” Dr Faisal tweeted that Pakistan will not receive any service charge from Sikh pilgrims on 9th and 12th of this month, abiding by the commitment of Prime Minister Imran Khan. He said Prime Minister had announced waiver of service charges of 20 dollars on these two dates. Officials said that the special relaxation, earlier given by Pakistan, cannot be implemented after India’s refusal. Both the countries have started working on exchange of pilgrims’ lists. Islamabad had waived off the clause of passports and registrations for one year in the wake of the 550th birth anniversary of Baba Guru Nanak.

Indian travellers will arrive in Pakistan through Kartarpur corridor and Wagah border. The Sikh community from other countries will also be able to attend the celebrations of Baba Guru Nanak’s birth anniversary on November 9. Former Indian Prime Minister Manmohan Singh, cricketer-turned-politician Navjot Singh Sidhu, Indian Punjab Chief Minister Amarinder Singh will attend the ceremony among others. Indian film actor Sunny Deol is also reported to be travelling to Kartarpur. This week, Pakistan said that the Kartarpur corridor will change the history of the region. Dr Faisal said over 10,000 Sikhs from India and other parts of the world will attend the inauguration of corridor by Prime Minister Imran Khan. Faisal regretted the Indian posture of not reciprocating to Pakistan’s peace overtures for resolution of all outstanding disputes including those relating to Kashmir, water, Sir Creek and Siachen.The pilgrims from different countries including Canada, Britain, America, Singapore, Malaysia, Kenya, Uganda, Tanzania, New Zealand and Australia will also participate in the inauguration ceremony.