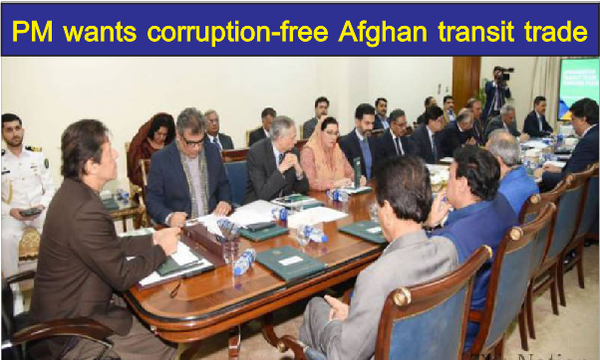 ISLAMABAD - Prime Minister Imran Khan on Wednesday said that Pakistan is committed to facilitate transit trade of Afghanistan. Chairing a meeting to review issues related to Pak-Afghan Transit Trade, the Prime Minister, however, directed to ensure that the arrangement with Afghanistan is not misused and does not hamper the growth of Pakistani industry. Reiterating that the growth of industry and boosting exports are the key priorities for the present government, Imran underscored the need for streamlining the Pak-Afghan Transit Trade arrangement, in coordination with Afghan authorities, so as to create a mutually beneficial situation for the two countries and the region. He also underlined the need for employing technology to preclude misuse of the arrangement by vested interests. Imran directed the Ministry of Commerce to present a comprehensive plan, within three days, to ensure that a transparent corruption-free arrangement capable of serving the intended purpose is put in place. The prime minister was briefed on the existing set-up under the Pak-Afghan Transit Trade Agreement and various issues being encountered at operational level.

Chairing a meeting of government’s economic team, the prime minister said timely completion of development projects will not only accelerate economic process in the country but also create job opportunities for youth. He instructed the Prime Minister’s Office should constantly be appraised about the progress on development projects and to resolve any hurdle. During the meeting, former Finance Minister Shaukat Tareen informed the prime minister that non-governmental organisation Akhuwwat is finalising a project to collect edibles from well-off people and distribute them among deserving and needy. He said this procedure will be completed in a week. Welcoming the initiative, Imran said this step is in line with the government’s welfare activities and his government will extend every possible cooperation in this regard. Prime Minister’s Special Assistant on Social Protection and Poverty Alleviation Dr Sania Nishter briefed the Prime Minister about the provision of Ehsas Ration Card in erstwhile tribal areas. The Prime Minister directed to timely ensure launching of various projects under Ehsas Programme so that maximum people can be benefited from this welfare initiative of the government.

Addressing at the distribution of Rs30 billion refund cheques of sales and income tax among prominent exporters at the PM Office, Imran Khan said the government was firm to strengthen tax culture in the country for wealth creation to further spend on human development. He urged the business community to consider paying taxes as their national duty. The event was aimed at giving priority to the demands of business community and to create a taxpayer friendly environment for improvement of cash flow for taxpayers in general and for export-oriented sector in particular. The prime minister said a country with weak tax collection system could not make progress economically. He lauded Federal Bureau of Revenue Chairman Shabbar Zaidi for taking effective steps for improved tax collection that registered an upward trend. Imran mentioned that current account deficit was the biggest challenge at the time his government came in power last year, however, said the efforts of economic team resulted in stabilisation of economy. He said in four years, the country for the first time witnessed surplus of current deficit account besides confidence of public had restored in stock market and volumes of export had increased. He said previous short-term policies and adhocism for political gains was the main reason behind instability of economy. He said his government was inspired by China’s model of economic progress which was based on long-term policies and human development. The prime minister said the country had rich gold and copper reserves, however the disaster of corruption played havoc incurring billions of losses to national exchequer. In Karkey case, he said the government resolved the dispute with support of Turkish President Recep Tayyip Erdogan, adding efforts were afoot to work out Rs900 billion damages imposed on the country in Reko Diq case.

Imran Khan said uplift of the agriculture sector is amongst the top priorities of the government. Talking to Federal Minister for National Food Security and Research Makhdoom Khusro Bakhtiar, the Prime Minister said the share of agriculture in the GDP with fifty percent workforce connected with it reflects the sector’s importance to the country’s economy. He said agriculture has been made part of the CPEC and it is utmost effort of the government to take full benefit from the Chinese expertise in the sector by introducing the latest technology and farming techniques to the farmers. This, he said, will help improve the productivity of the agriculture sector. Khan expressed the confidence that Makhdoom Khusro Bakhtiar, who has recently been given the portfolio of the Ministry of National Food Security, will fully devote his energies for the development of the agriculture sector. Meanwhile, Federal Minister for Railways, Sheikh Rasheed Ahmed also called on the Prime Minister and discussed overall political and economic situation of the country. Early, Senator Waleed Iqbal also called on the Prime Minister and exchanged views on matters of public importance.