Will give you food, but no NRO, PM tells marchers 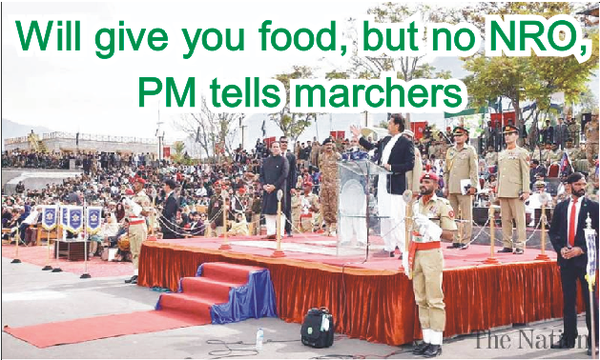 GILGIT     -    Prime Minister Imran Khan Friday lashed out at the opposition parties for staging what they called ‘Azadi March’ in the federal capital in a bid to topple the democratic government and categorically said neither he would resign nor any corrupt person would be given National Reconciliation Ordinance (NRO). The prime minister told protesters gathered in the federal capital that when they run out of food, more will be sent to them, but their leaders should not expect any amnesty from him. “Gone are the days when one used to use Islam to gain power. This is a new Pakistan. Sit however long you want. When your food runs out, we will send more. But we will not give you an NRO,” Imran Khan declared. Speaking at a public meeting here, he said the country could not progress until and unless the menace of corruption rooted out and those who looted the country to be taken to task.

He said the nation knew all those people and also the reality of the Azadi March, adding corruption cases of all those “unemployed, political orphans, rightist and leftist” gathered in the federal capital had surfaced and reiterated that no corrupt person would be spared. The prime minister said the opposition parties were so much confused that none of them had a clear agenda. Bilawal Bhutto was participating in the march as a liberal while Mahmood Khan Achazai, who was a strong opponent of Maulana Fazlur Rehman was also attending it, he added. “Bilawal, who calls himself a liberal, has also joined the jalsa. The only thing liberal about Bilawal is that he is liberally corrupt,” he said.The prime minister came hard on JUI-F chief Maulana Fazlur Rehman and the opposition parties and said gone were the days when the name of religion Islam was used for making money and to reach the corridors of power.

He was critical of Maulana’s role as chairman of Kashmir Committee and said Maulana was a favourite of the Indian media as they were portraying him as he was their citizen. He said two opposition parties in their ten years tenure had increased Pakistan’s debt four times, adding the country’s total debt in 60 years were $6 billion while in the last 10 years it had reached $30 billion. Those people siphoned off the looted money through Hundi and money laundering and their children were now billionaires, and they were not ready for accountability, he added. He said corruption destroyed the societies and countries and his party Pakistan Tehreek-e-Insaf (PTI) had struggled against corruption for 22 years, adding “those nations become developed and progressive who spend money on its citizens.”

Imran Khan paid tribute to martyrs of 1947 to 48 Independence War from Dogra Raj and said he had come here to celebrate the 72nd Independence Day with the people of Gilgit Baltistan. This is the land of Ghazis and martyrs and the people of Gilgit Baltistan must be thankful to Allah Almighty that they were not experiencing the same sufferings as the people of Indian occupied Jammu and Kashmir were witnessing right now. He said the scenic Northern Areas had great potential of tourism, adding he had visited the entire world but this was the most beautiful area on earth. He said the present government was fully focusing on promotion of tourism in these areas and had opened Pakistan for international tourists, adding people of 70 countries would be given visas on arrival along with no objection certificate requirement for foreigners who wanted to visit the scenic Northern Areas.

He said these steps would increase tourism in Northern Areas and boost economy of the region besides people of the region would get jobs with the increased economic activities. The prime minister said the present government was focusing on resolving basic issues of Gilgit Baltistan which were ignored by the past governments. He said the scenic beauty of these areas could be exploited to its true potential. He said the government was planning and in contact with foreign countries and investors to bring foreign investment for development of infrastructure of these areas. He assured the people for resolution of their problems and said electricity availability in winter would be made possible. He said a private company was setting up a processing plant which would preserve the local fruits for a long time.

The prime minister congratulated and expressed best wishes to the people of Gilgit Baltistan for their Independence Day. Addressing the Azadi Parade at Agha Khan Polo Stadium, marking Gilgit’s independence from Dogra Raj, Imran Khan reiterated Pakistan’s support to Kashmiris waging struggle against the Indian oppression and said being an ambassador of the Kashmir cause he would continue to internationalise their just case.

“I am your ambassador and spokesman of Kashmir, and I will be the advocate of your cause in the world,” he said. Imran said the Indian prime minister had played his last card on August 5 and said as soon as the Indian forces lift the curfew in the occupied Kashmir, a sea of people would rise to strive for their freedom from the Indian yoke. “No power can stop Kashmiris from attaining their goal of liberation,” Imran said.

He said basically it was the “fear” that makes a person subservient to others, however the Muslims by their very nature feared none but Allah and does his best to uphold the truth. “Such a person does not beg anyone and we are trying to make our nation self-sufficient on these very principles,” he said and added it was the reason that he was a strong advocate for emulating the social welfare state of Medinah.

He said only by pursuing the principles of justice and equality, this country can make progress. He said he was proud to join the people of Gilgit on their freedom day.He lauded the sacrifices of the Northern Light Infantry and the freedom fighters of 1947-1948. He said he had visited the most scenic places of the world, but was yet to find a place better than the magnificent beauty of Gilgit Baltistan. He said this area would also get a big boost in economy as the China Pakistan Economic Corridor would be passing through Gilgit Baltistan.

Imran Khan launched construction work on four development projects in Gilgit Baltistan including a 250-bed hospital, two power production and a power transmission projects. He kicked off work on the construction of 250-bed hospital that would benefit around six million people of the region. To be built on 500 kanals of land in Hussainabad area of Skardu, the first phase of the project would cost Rs3 billion. In the second phase, another 250 beds would be added. The prime minister also performed the ground breaking of a 34 megawatt hydro power project to be constructed in Rondu Skardu with a cost Rs9.5 billion. Besides a 26MW hydro power project to be built in Skardu, he also launched work on the first phase of Regional Grid of Gilgit Baltistan that would cost Rs4.95 billion and take four years to complete.