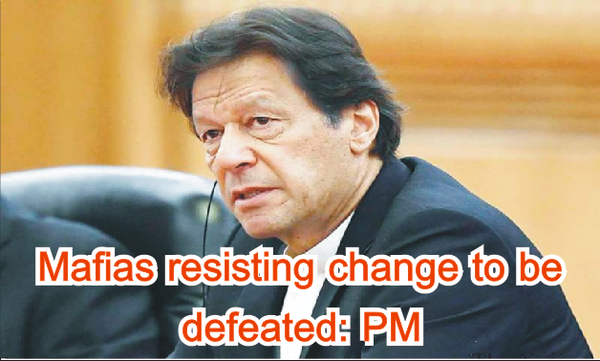 MIANWALI     -    Prime Minister Imran Khan on Friday maintained that mafias are resisting the change in the country, but PTI government is on the right path to bring about the change as there is no future of Pakistan unless these mafias are defeated. Imran said with the current account deficit turned into surplus and fiscal deficit into primary surplus, Pakistan’s economy had finally been put into right direction. Addressing a ceremony to launch work on seven mega development projects in education, health, tourism and water supply projects, the prime minister said after tackling the economic challenge, the government would now fully focus on uplifting the living standard of the common man. Rubbishing the opposition’s propaganda, Imran said the government had overcome the current account and fiscal deficit that had been left behind by the previous government. He said the inflation had increased owing to the devaluation of the local currently, caused by the deficit, the incumbent government had inherited but the government will overcome it.

Expressing pride in his economic team, he said the business was growing, stock market was improving and local and foreign investments were pouring in the country. Imran said the parties which had recently held a march, had never been concerned about the country, rather they were worried about the fate of their own politics and their own future besides being frightened of corruption cases. Imran viewed that such mafias always resisted the change in the country and had convinced the previous rulers to give up their cases in return of the protection of his seat. “But Imran Khan is not here to protect his seat, rather to bring about change. Change will not occur unless these mafias are defeated. Otherwise, there is no future of the country,” he remarked. He said the rupee was also devalued because of money laundering through Hundi or Hawala and questioned as why the members of the Sharif family had absconded and not facing the courts.

Imran told the gathering that being challenged by the opposition he had produced before the court 60 documents in 10 months, proving all money trail of his property in London as well as residence in Bani Gala, contrary to the opposition party which had furnished fake documentsHe said Bilawal Bhutto and Shehbaz Sharif had joined the JUI-F-led march just to pressure him to give up the corruption cases and enjoy the smooth sailing. “Until I am live, I will not do such a treachery with my country by making a deal with them. No one will make such treachery. The youth will become my team and I will face them,” he remarked as the crowd chanted ‘Long Live Imran Khan’ slogans.

Imran said contrary to his medical reports depicting the critical conditions of his heart, lungs and platelets, Nawaz Sharif’s condition looked to be improved all of sudden as he boarded the plane. Imran said he was forced to stare at the PML-N supremo’s medical reports after seeing the former premier board the air ambulance. The report listed 15 diseases including cardiac complications and suggested that Nawaz was at the verge of his demise, he added. He said after seeing Nawaz board the air ambulance, he wondered if the former prime minister “got healthy with the first glance of the London-bound airplane”.He told the gathering that more and more investment was coming to Pakistan and the revenue would particularly be utilized for uplift of the neglected areas like Mianwali, Taunsa and others.

He said the Namal university of Mianwali would be upgraded into a centre of excellence as foreign faculty was joining there. The prime minister said the vice chancellor of the Mianwali university had already been appointed and assured that the government would upgrade and build new schools in the area Punjab Chief Minister Sardar Usman Buzdar, Health Minister Dr Yasmeen Rashid, Commerce Adviser Abdur Razak Dawood and provincial cabinet members accompanied the prime minister.

Earlier, the prime minister broke ground for a Mother and Child Hospital, Bulk Water Supply scheme for Khattak belt and Isa Khel, Restoration and Widening of Urban and Rural Roads in Mianwali, Dualization of Sargodha-Mianwali Road Phase-I, Restoration of Water Supply Scheme in Mianwali and Upgradation of existing and construction of new schools in Mianwali.

The prime minister also inaugurated Water Sports and Tourism Club in Mianwali as a full-fledged tourist resort with 21 water boats and 30 rooms for accommodation. He said the local government elections would be held soon in Punjab and Khyber Pakhtunkhwa which would ensure the transfer of resources up to the villages where the people would monitor the performance of the schools, hospitals, police station and other functions. Moreover, the cities would elect their Nazims on the patterns of mayors of London and New York who would form their own teams and would also be empowered to generate revenue as per their own policies. He said the country could not progress unless such a local government system was enforced.

In his address, Chief Minister Sardar Usman Buzdar said the construction of a Nursing College and a Mother and Child Care Hospital were the fulfillment of their commitment with the local people who had voted them to government. He said just like other parts of South Punjab, Mianwali too had been facing neglect but assured that the government would develop those areas at par with the developed ones and no Azadi March could impede the journey of the national development. Revealing the Punjab government’s plans, he said the provincial government had allocated Rs20 billion for construction of five mother and child care hospitals in different cities besides another Rs5.57 billion for upgradation of Tehsil headquarters and basic health units. He said Rs300 million had been specified for the Mianwali university and the cadet college of the city would soon be functional. Another Rs3.10 billion had been allocated for construction and uplift of 1234 schools in the area, Rs11 billion for 42 roads, Rs700 million for water supply, Rs12 billion for a canal, and Rs6 billion for PM Kamyab Jawan Program besides another Rs9 billion for loans to youth by Punjab government.He said modern bazaars would be developed at Tehsil level where Kisan Platforms would be set up to allow the growers sell out their produce directly to the consumer at a far lower rate than the market.The chief minister said 10 new special economic zones were being established in the province and requested the prime minister to order early completion of Mianwali-Chakwal and Mianwali-Muzaffargarh roads.