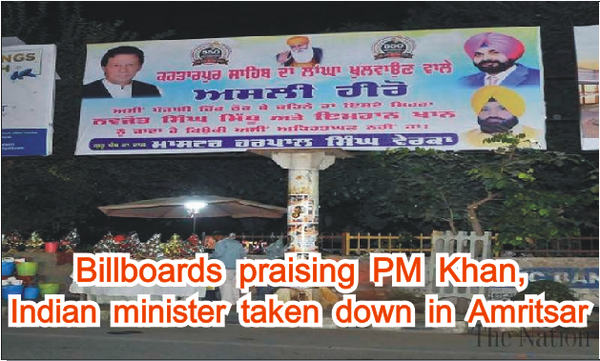 In the Indian city of Amritsar, billboards that lauded Prime Minister Imran Khan and Indian minister Navjot Singh Sidhu were taken down on Thursday. According to reports, the Sikh community had put on the billboards to express their happiness at the opening of the Kartarpur Corridor. They credited Minister Sidhu and PM Khan for being the "real heroes who made the Kartarpur Corridor a reality".

The billboards were put on by Amritsar's municipal councillor, Harpal Singh Verkha, who like Sidhu, is a member of the Indian National Congress (INC). The INC forms the ruling government in the Indian state of Punjab, which as a party, is thought to be friendlier to Pakistan than the Bharatiya Janata Party (BJP), which forms the government on the Indian federal level.

Sidhu has already been granted permission by the Indian government to attend the corridor’s inauguration in Pakistan on November 9, and was issued a visa by Pakistani authorities earlier on Thursday. Mostly Punjabi-speaking, the Indian Sikh community has announced it will protest the removal of the billboards. The Indian state of Punjab, like New Delhi, was also one of the zones of protest against the BJP-led move to nullify Indian-occupied Kashmir's special status. Videos of male and female Punjabi students from Chandigarh and Amritsar condemning Modi's move in Kashmir became viral in Pakistan.