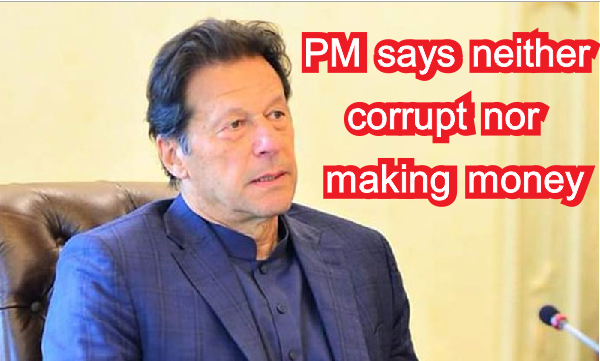 ISLAMABAD - Sounding with his usual confidence and pragmatism to surmount major challenges Pakistan is facing, Prime Minister Imran Khan on Friday said he is not afraid of anyone because he is neither corrupt nor is in politics to make money. “I am neither corrupt, nor am I in politics to make money,” Imran Khan told a group of journalists from the print media during an interaction here at the Prime Minister House here. Imran said that those who are corrupt and have looted the wealth of the country are afraid of the military. “Military agencies always know who is doing what,” added the premier in reference to the opposition parties. He said they are political mafias and they do not care about inflation, but care only about their personal gains, added the premier.  On the other hand, he said he is running his personal affairs with his own salary. “I think I might have one of the lowest salaries of the chief executive of a country in the world.”  He said differences are always there in political parties especially in a coalition setup and added and PTI has done away with reservations of its coalition partners.

Commenting on rumours that days of his government have been numbered, the prime minister said: “We are going nowhere. We shall complete our mandated term”. Taking swipe on the opposition parties, the prime minister said the opposition does want to see us succeed because they know our success means their business will shut down and they will go to jail. Prime Minister Imran Khan said the government is thinking of trying Jamiat Ulema-e-Islam chief Maulana Fazlur Rehman for high treason under Article 6 of the Constitution on the basis of his recent remarks about toppling of the elected government. “Maulana Fazlur Rehman should be tried under Article 6 of the Constitution. There should be an inquiry into the remarks he made, and he should be asked who gave him that understanding,” the prime minister added.

He counted as one of the biggest successes of his government to have saved the country from default on debt payments during the first year in power, adding that the government had reduced the current account deficit by 75 percent. The government, he reminded, had successfully dealt with the difficult economic situation with the cooperation of friendly countries including Saudi Arabia, China and the UAE leaving the country with only $2.5 billion deficit on the current account. The prime minister explained the government had only two weeks foreign exchange reserves when came to power and had to pay $10 billion loan which saved Pakistan from default. “Had Pakistan defaulted, the dollar’s value would have gone beyond Rs 200 and the country would have to face sanctions,” he asserted.

“I have called an emergency meeting of all the stakeholders next week to help resolve the issue of circular debt”, he informed adding that he has assigned this task to the Chairman of National Electric Power Regulatory Authority (NEPRA). Commenting of the LNG contract signed by the PML-N government with Qatar for 15 years at higher rates, and today, gas is available at low rates. Imran Khan said the country enjoys unprecedented respect and a positive image in the world today due to the government’s successful policies. The Prime Minister said that the government is putting up a proper mechanism to ensure an adequate early warning system for detecting shortage of essential food items and no recurrence of price hike in future.

Commenting on the recent price hike of flour and sugar, the prime minister said he was awaiting the report of a high-level probe into sharp increase in the prices of wheat flour and sugar that caused widespread criticism on the government. “We will fix responsibility and find why it happened,” Imran Khan said and added that the joint investigation team had submitted its report about the factors leading to the price hike; however, he had returned it to fill the voids. “We will share the information with the public and put in place a system so as to ensure there is no such repeat,” he said. He blamed cartels in the country controlling the prices of commodities.

When asked who controls these cartels and whether names of Jehangir Tareen or Khushro Bakhtiar were there in the report, the prime minister said:  “There were no names. The report had gaps, and we have asked to submit a more comprehensive one.” He said the government is going to make the Competition Commission of Pakistan (CCP) more effective to ensure stable prices of the essential commodities. Responding to a question, the Prime Minister said corruption has to be eliminated for real growth in the country. He said the government is committed to act against corrupt elements. Regarding electoral reforms, Prime Minister said that the government was in the process of introducing electoral reforms, which would include provisions for electronic voting and the biometric verification of voters.  “Senate elections will not be held under secret ballot anymore,” he revealed.  “We will introduce a law that makes it mandatory to hold Senate elections by a show of hands,” he added.

The prime minister also complained about the national media saying, “I have suffered more media attacks in the past two years than anyone else.” “I have never given Saudi Arabia or China’s example with regards to media,” he insisted. “I have always talked about Britain as an example in terms of media. Over there, if any media house publishes false news or a false allegation, it is shut down.” He lamented that “even his statements were changed” by the media. Specifically, the premier said “false news” was published about his visit to China, due to which “we faced a lot of embarrassment in China”. PM says neither corrupt nor making money