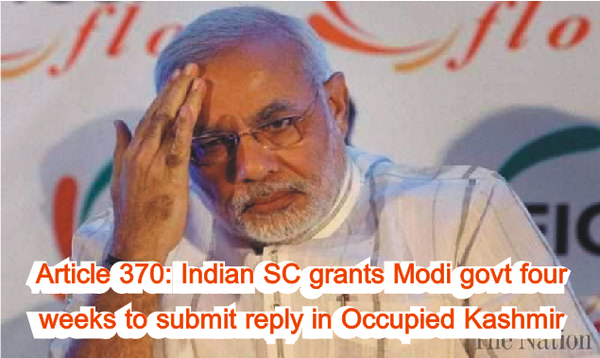 The Supreme Court of India on Tuesday gave Narendra Modi-led government four weeks to submit replies in petitions challenging the abrogation of Article 370 that granted special autonomy to occupied Kashmir, India Today reported. The petitioners were granted one week to file responses once the Indian government submits responses. The five-member bench also allowed New Delhi and IOK administration to file counter-affidavits on petitions challenging the revoking of special status granted to the occupied valley.

India today underscored that despite the October 31 deadline for implementing on the bifurcation of the occupied region, the Modi-led government and IOK administration has been given four weeks to reply to petitions against repealing of Article 370 and passing Jammu and Kashmir Reorganisation Act. During the hearing, India’s attorney general KK Venugopal and IOK solicitor general sought four weeks times to submit responses. The petitioners, however, opposed the demands and stressed that allotting additional time would render pleas “infructuous or pointless”. Indian top court’s decision is applicable to all petitions filed till today [Tuesday]. The supreme court registry clarified that it will not entertain any more writ petitions against the Indian government’s move to scrap IOK autonomy. Refusing to pass any order on the implementation of J&K Reorganisation Act, the Indian apex court said any such move “can turn back the clock if we decide in your favour”. The hearing has been adjourned till November 14.