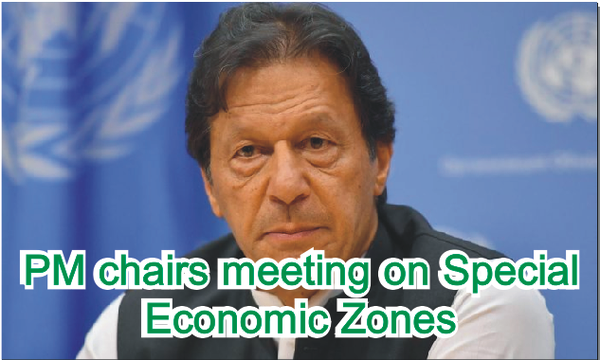 Prime Minister Imran Khan Wednesday presided over a meeting to review progress on establishment of Special Economic Zones across the country. Minister for Planning Makhdoom Khusro Bakhtiar, Minister for Power Mr. Omar Ayub Khan, Adviser to PM Mr. Abdul Razzak Dawood, SAPM Dr. Firdous Ashiq Awan, SAPM Mr. Nadeem Babar, Chairman BOI Syed Zubair Haider Gillani and other senior officials were present during the meeting. The meeting was briefed on the provision of utilities, revision in the existing legislative framework for incentivization, facilitation of foreign and local investors and effective coordination between the centre and the federating units for smooth and effective implementation strategy.

It was informed that funds to the tune of Rs. 2.8 billion will be provided for provision of electricity to Bin Qasim, Dhabeji, Rashakai and Hattar SEZs during the financial year 2019-20 while four PC-I have already been submitted for facilitation in provision of electricity. Moreover, additional arrangements are being made for provision of 110 MCFD Gas at the cost of 3.75 billion to different SEZs out of total 689 MMCFD requirement till 2023. The meeting was also apprised of the revisiting efforts in the existing legislative framework regarding the uniform treatment for all local and foreign investors to ensure 100% foreign ownership and repatriation of profit as well as dividends.

The new legislative framework is being devised to encourage exports, import substitution, and local manufacturing that would check unemployment, current account deficit and facilitate transfer of technology. Work Visa and Visa on arrival facility for 67 countries has already been extended, the meeting was further informed. It was also recommended to ensure plug n play infrastructure in all SEZ's for attracting large foreign manufacturing companies to relocate their facilities to Pakistan. Prime Minister Imran Khan directed to ensure that no effort is spared to ensure the colonization of SEZs on war footing, addressing concerns relating to land availability, creation of jobs & wealth which in turn will help in turning the wheels of the economy, the Prime Minister stated.

"We should remain competitive in providing incentives for transfer of technology and relocation of industries from China on the lines of the incentives being provided by other regional countries," the Prime Minister stressed. He said that all the initiatives for establishment of SEZs will be spearheaded by the Federal Government while taking the provinces fully on board. The present Government has brought about significant improvements in the Ease of Doing Business sentiments in the country. In this spirit there is a need to devise an effective awareness strategy to inform the people about the on-ground progress and emerging socio-economic opportunities set to be available after the operationalization of SEZs enabling them to reap the benefits to the fullest, the Prime Minister concluded.