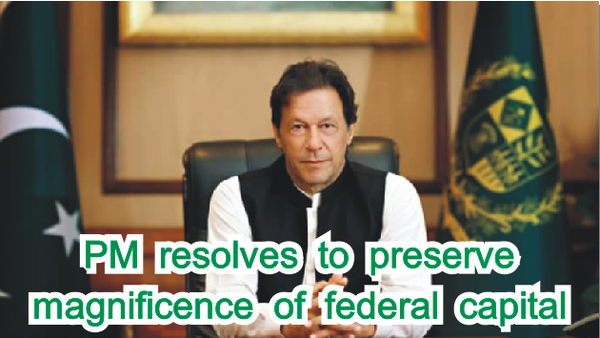 Prime Minister Imran Khan has reiterated that preservation of green areas should be a priority keeping in view shrinking green lands and rapidly growing concrete structures in major cities. The comments appeared when Prime Minister Imran Khan approved, in principle, re-structuring plan of Capital Development Authority (CDA) and directed that the plan be presented before the next Cabinet meeting for consideration and final approval. The Prime Minister appreciated the efforts of the Commission towards reviewing the Master Plan of the capital city for catering to present as well future requirements of the federal capital and addressing some of the critical issues including urban regeneration, conformity and new building code, Katchi Abadis, solid waste management plan for rural areas, ensuring water availability and new infrastructure to cater to the needs of growing population.

The Plan aims at restructuring of the development authority to make it efficient and improve its service delivery. It was explained that the object of restructuring is to introduce effective corporate governance model in the organization. The plan was presented during a meeting chaired by the Prime Minister at Prime Minister's office today. The meeting was attended by SAPM for Information & Broadcasting Dr. Firdous Ashiq Awan, SAPM for Overseas Pakistani Mr. Zulfiqar Abbass Bokhari, Secretary Interior Maj (r) Azam Suleman Khan, Chairman CDA Mr. Amer Ahmed Ali, Mr. Nayyar Ali Dada and other others.

Chairman CDA also presented the progress report of last six months and apprised the Prime Minister that for the first time, CDA's financial health has significantly improved with an available balance of approximately 11 billion rupees to be utilized for developmental activities. The PM was informed that after devolution and creation of MCI, the primary role of CDA remains sector development. It was observed that sector development had been stalled for last many decades. However, CDA is now on the verge of initiating development in stalled sectors, which would lead to creation of 23,000 housing units. In this context PC-1 for I-11, I-14, I-15 and E-12 have been approved and development activity in e-12 will commence shortly. Earlier, the Prime Minister was also briefed about the progress made towards review of the Master Plan of Islamabad. While briefing the Prime Minister about salient features, it was informed that the Commission, constituted for the review of the Master Plan, has its finalized report which would be presented during the next Cabinet meeting.