Imran rules out meeting with Modi 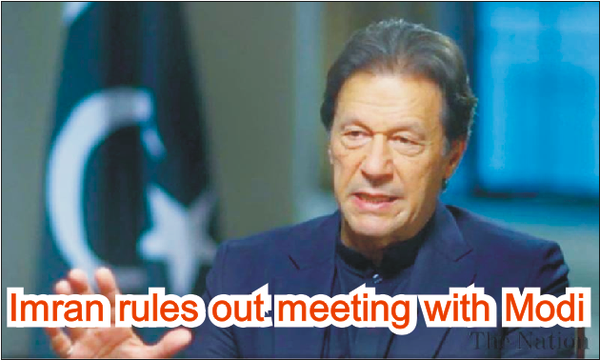 New York - Prime Minister Imran Khan has made it unequivocally clear that he will not be meeting Indian premier Narendra Modi, given the latter’s actions in occupied Kashmir. “There is no question of me meeting Prime Minister Modi,” said the prime minister in his interview with CNN’s Christiane Amanpour. “This is only a mindset which believes in Hindu superiority, which doesn’t believe other minorities [...] religions are equal,” he said. He said that only such a mindset could have done what is being witnessed in occupied Kashmir. “How could anyone do this to other human beings?” The prime minister went on to say that the world would have even reacted had there been animals locked up for more than 50 days with no hospitals for them.

Amanpour then asked the premier why he thinks there has been no reaction, citing international uproar over Russia’s annexation of Crimea as an example, after which sanctions were imposed on Russia. In response, the prime minister said that he had apprised many world leaders of India’s actions and reminded them that 11 United Nations resolutions exist granting Kashmiris the right to self-determinaton. “A lot of people didn’t realise this. Even the ones who do realise, look upon India as a market of 1.2 billion people [for] trade and so on. And this is the sad thing: material over humans.”

Remarking on US President Donald Trump’s offer for mediation, the prime minister said that “President Trump, [as] the head of the most powerful country in the world, [is] best placed to do something like this.” He said that even though Trump has made the offer multiple times, Modi has rejected it each time, “because the moment this becomes internationalised, [countries] will realise that Kashmiris were denied their right of self-determination”. “They will know of the human rights abuses which are going on in Kashmir,” he added. He said Modi does not want international mediation and tells the international community it is a bilateral issue and when Pakistan objects to its actions, India terms them an internal issue, with all parties to the dispute “going around in circles”.

The prime minister expressed hope that eventually the international community “will move in because this is going to become a flashpoint”. He said India was “diverting the world’s attention” from Kashmir and telling the world that “Kashmiris actually want this and Pakistan is a spanner in the works by sending in terrorists”. The premier said the aim was to draw attention away from what is going to be a massacre and the mantra being used is that “it is Islamic terrorism”. “Islamic terrorism since 9/11 has meant that world just looks the other way. You can violate all the human rights. You can do anything.”

The prime minister added that attention would also then be diverted towards Pakistan. He said that this was the reason he had explicitly told the nation that anyone going into Kashmir “will be an enemy of Pakistan and enemy of Kashmiris”. He also spoke of how after Pakistan’s peace gesture of returning India’s pilot after the Feb 27 incident, “so that things don’t spiral out of control”, Modi’s entire election campaign had hinged around how “Pakistan is so scared of [him]” and rhetoric like “I will teach Pakistan a lesson”. “In six years India has changed and I fear it is going to change even more rapidly. That is why I call it appeasement. The world has to take a stand. “In this day and age, you cannot put 8 million people in jail and surround them by 900,000 troops,” he said, calling upon the world to realise that such oppression must not be allowed.