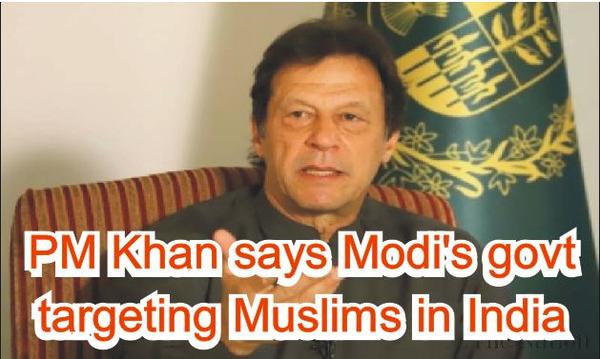 Prime Minister Imran Khan on Saturday said that the illegal annexation of occupied Kashmir was part of a wider strategy by the Indian government to target Muslims.

In a post on Twitter, PM Imran said, "Reports in Indian and international media on Modi Govt's ethnic cleansing  of Muslims should send alarm bells ringing across the world that the illegal annexation of Kashmir is part of a wider policy to target Muslims."

The prime minister shared a recent report from the Indian state of Assam where almost two million people were denied citizenship on Saturday, risking mass deportations of Muslims from the area.

Earlier today, the Assam government had published a citizenship list aimed at weeding out "foreign infiltrators", in a process the central government wants to replicate nationwide. A total of 31.1 million people were included in a final National Register of Citizens (NRC), but 1.9 million were deemed ineligible, according to a statement from the Assam government. Most of those excluded were expected to be Muslim.

Assam, an impoverished isolated state of 33 million, has long seen large influxes from elsewhere, including under British colonial rule and around Bangladesh's 1971 war of independence when millions fled into India. For decades this has made Assam a hotbed of inter-religious and ethnic tensions. Sporadic violence has included the 1983 massacre of around 2,000 people.

This has led to pressure from those who see themselves as genuine Assamese for a lasting solution — which they hope will come from the NRC released on Saturday. Only those who can demonstrate that they or their forebears were in India before 1971 could be included in the list. But navigating the complex process is a huge challenge for many in a region of high illiteracy where many lack documentation.