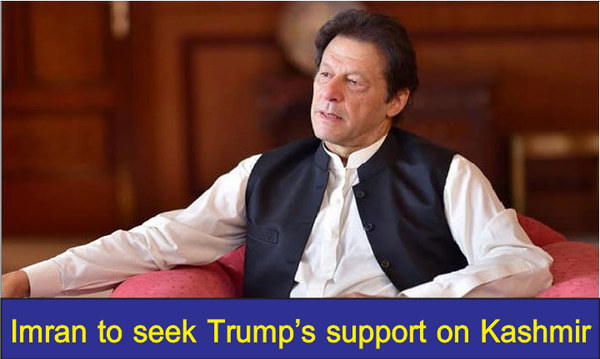 ISLAMABAD    -   Prime Minister Imran Khan will seek US President Donald Trump’s help on Kashmir in the United Nations when he meets the key world leader today (September 23), officials said on Sunday. Imran arrived in New York over the weekend to lead the Pakistan delegation to the 74th session of the United Nations General Assembly.

He will address the 193-member Assembly on September 27, sharing Pakistan’s perspective and position on the Jammu and Kashmir dispute, the current human rights situation and the related dimensions. The premier will discuss Islamabad’s position on key global and regional issues before one of the largest gatherings of leaders from around the world

He will specifically focus on the deteriorating situation in Kashmir since August 5 when Indian Prime Minister Narendra Modi moved to annex Occupied state. Prime Minister Khan is expected to make a clarion call on the international community and the United Nations to live up to their promise of the right to self-determination of the people of Jammu and Kashmir in accordance with the relevant UN Security Council resolutions.

Close aides of PM Khan told The Nation that the premier will seek Trump’s support in and out of the UN to resolve the Kashmir issue. “Since the PM is on ‘mission Kashmir,’ he will focus on this (Kashmir). The main agenda for him would be Kashmir in all bilateral meetings on the sidelines (of the UNGA session),” said an aide.

Another official said PM Khan expected President Trump to be helpful since he has offered mediation on a number of times. “Trump has been helpful so far. He has listened to us (Pakistan) and agreed with our point of view. We hope for his support,” he added. President Trump’s meeting with Prime Minister Imran Khan comes a day after he joined Indian Prime Minister Narendra Modi for the ‘Howdy Modi’ event in Houston. The US leader will again hold a meeting with Modi in New York tomorrow (September 24).

Both the meetings with the leaders of Pakistan and India would be held in New York on the sidelines of the 74th session of the UN General Assembly. On September 24, Donald Trump will deliver his address to the UN General Assembly. After that, he will hold a number of bilateral meetings. Prime Minister Imran Khan during his seven-day visit, will hold several bilateral meetings with his counterparts, including United President Trump and participating in high-level UN summits on climate change, sustainable development, universal health coverage and financing for development.

The PM will also attend and speak at high-level side events co-hosted by Pakistan and Turkey on countering hate speech and on environmental protection and poverty alleviation, co-hosted by Malaysia and Pakistan. A trilateral summit meeting of Pakistan, Malaysia and Turkey will be held on the General Assembly session’s sidelines. Apart from these engagements, PM Khan will interact with international media outlets, including meetings with editorial boards. Speaking engagements at leading think-tanks, including the Council on Foreign Relations and the Asia Society, and meetings with heads of major international human rights organizations are also on his schedule.

The foreign ministry said Prime Minister’s visit will reinforce Pakistan’s abiding commitment to the UN Charter, international law and cooperative multilateralism, with the UN at its core. Pakistan’s permanent representative to the United Nations Ambassador Maleeha Lodhi called Imran Khan’s visit, “mission Kashmir for Pakistan” as the premier aims to pull the world’s attention towards the longstanding Kashmir dispute between the nuclear-armed Pakistan and India.

“This is mission Kashmir for the Prime Minister and for Pakistan.... his message will be clear: the occupation must end, and a peaceful solution found for the Kashmir dispute. He will highlight the plight of the Kashmiri people who continue to suffer a suffocating lockdown and a brutal occupation,” said Ambassador Lodhi. This is the Prime Minister’s first General Assembly visit and “he will be the voice of the Kashmiri people at the UN,” the ambassador said. Earlier, PM Khan visited Saudi Arabia to hold a meeting with Saudi Crown Prince Muhammad Bin Salman. The premier flew to New York on the Crown Prince’s special aircraft.