PM Khan vows to stand with Kashmir until its freedom 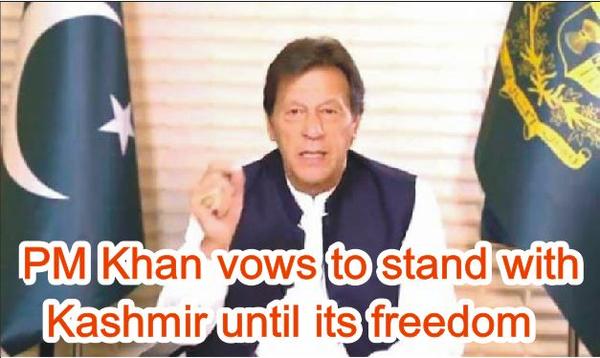 Prime Minister Imran Khan on Friday addressed the 'Kashmir Hour' rally outside the PM Secretariat stressing that the international community remains silent when Muslims are being oppressed.“The whole world is watching what is taking place in Kashmir. I want to tell you that if Kashmiris were not Muslims the entire world would have stood with them.”

Prime Minister Imran Khan said all Pakistanis stood with Kashmiris. “Our Kashmiris are going through a difficult phase. Approximately eight million Kashmiris for the last four weeks have been locked under curfew.” He added that the purpose of today was to send a message from Pakistan that until Kashmiris get their freedom we would continue to stand with them. “We will stand with them till the last breath.”

The prime minister said it was important to understand the type of government in India which was oppressing people. “We need to understand the ideology of the RSS. This was a party which was motivated by hatred for Muslims. This party was inspired by Hitler’s Nazi party. Their [RSS] manifesto was to remove Muslims or treat them as second class citizens in India”

The prime minister elaborated that the RSS ideology had ended a secular India. “RSS and BJP did not follow the policy of secularism. They do not believe in international laws or the Indian Constitution. They only believe in Hindutva.”The prime minister announced raising the Kashmir issue in the United Nations General Assembly. “I have told world leaders that if they do not stand with Kashmiris against Modi, the impact will be global in a similar way to what happened when the world did not stand against Hitler.

The prime minister said that Pakistan had warned the world of an Indian false flag operation in Azad Kashmir. “I want to tell Modi that our Army is ready for anything they do in Azad Kashmir. The world should know that when two nuclear countries face-off, the whole world will be harmed. I tell this to everyone I speak with.

The prime minister thanked all Pakistanis and assured Kashmiris that the support of the nation to them would continue.“Narendra Modi has played his last card after which Kashmir will gain its freedom,” the prime minister said concluding his address.   Imran Khan further said Modi has occupied the Kashmir just like Nazis in Germany. Rashtriya Swayamsevak Sangh (RSS), inspired by Nazis, believes in not giving equal rights to the Muslims, he continued.

The ‘Kashmir Hour’ is being observed throughout the country, with the national anthems of Pakistan and Azad Jammu and Kashmir (AJK) played in a show of solidarity with the oppressed Kashmiris.  Both the anthems were aired on all television and radio channels. All people and traffic stood still as the national anthems were played. The rally started with the recitation of the Holy Quran.